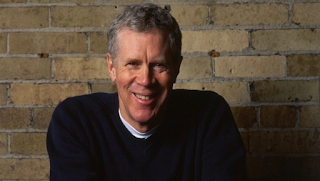 If you ever browse the radio dial and have come across the CBC, you have invariably heard Stuart McLean and the Vinyl Cafe.

The Vinyl Cafe is an hour-long radio variety show hosted by Stuart that is broadcast on the Canadian Broadcasting Corporation's radio service and is syndicated to approximately 80 U.S. public radio stations through Public Radio International. The program is also available as a podcast, although the podcasts are usually just McLean's stories for studio episodes because of copyright restrictions on recorded music. CBC Radio also currently airs a weekday afternoon program, under the title Vinyl Cafe Stories, which consists of two previously recorded Dave and Morley stories per episode.

The show features essays, fiction and music; while frequently humorous, the weekly programs are also often wistfully nostalgic. The live episodes often begin with Stuart reciting a complimentary description of the venue's community about its character and history. The show also endeavours to introduce listeners to new Canadian musical talent, through playing recordings in studio episodes and performances in the live audience ones.

A major feature of many of McLean's shows are the "Dave and Morley Stories", which feature a fictional Toronto family. The name "Vinyl Cafe" refers both to the show's musical content and the fictional record shop owned by McLean's character Dave. This aspect of the show is priceless and if you ever get a chance to listen to "Christmas At The Turlington's", you'll never let a Christmas season pass without it being part of your holiday ritual.

The Vinyl Cafe stopped touring and producing new episodes following McLean's diagnosis with melanoma in November 2015. On December 13, 2016 McLean announced he required a second round of treatment, meaning further delay in producing new episodes, and that repeats of past shows would stop airing on CBC Radio One effective January 2017 to "make room for others to share their work on the radio."

Moments ago CBC announced that Stuart McLean has passed away. A truly iconic voice of Canadiana has been silenced and will be missed.

RIP Stuart. You brought joy, humour and the occasional life reflection to the airways.  Thank you.

Posted by Whisperer at 2:25 PM