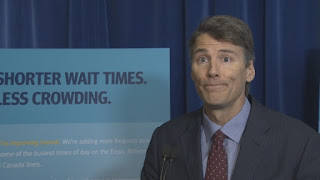 As outrage grows that there could be as many as 25,502 empty homes in the city, according to the 2016 Canada Census, Vancouver Mayor Gregor Robertson appears to have come out swinging to defend the denizen's of the Village on the Edge of the Rainforest.

“In a housing crisis, it’s unacceptable for so much housing to be treated as a commodity,” said Robertson in a statement. “Housing is for homes first, and as investments second.”

That's a stunning increase at a time that the real estate developers are clamouring for increased density to deal with the housing crisis (or as we call it the malinvestment in real estate as a commodity creating a 'housing bubble').

Now “occupied by usual residents” refers to a home where people live permanently. The 25,502 not included in that number were occupied by people who usually live outside Canada on the day of the census or were totally unoccupied.

Adding to the kerfuffle is the fact that last year Gregor's own staff had used BC Hydro data to conclude there are only 10,800 year-round empty homes in Vancouver.

So what did Mayor Moonbeam have to say about this, ummm, contradiction?

“Seeing data that shows there may be even more underutilized homes than BC Hydro suggests gives us more reason to aggressively move on the empty homes tax, and other measures that will help bring homes back within reach to residents in all corners of the city,” he said.

Ah yes, the empty homes tax.  Now... is this the same Mayor Robertson who, back in July 2016, took this position?

Says Robertson today, “the City won’t sit on the sidelines. Vancouver will continue to do all it can to maintain and protect affordable homes, and pursue all tools available to ensure the best use of all our housing.”

All that it can? Spoken like a true populist politician.


Please read disclaimer at bottom of blog.
Posted by Whisperer at 3:47 PM