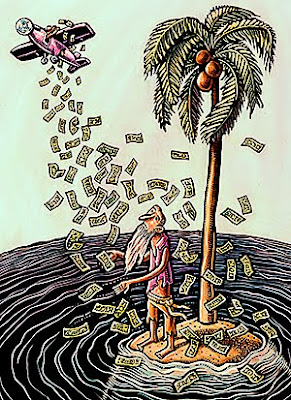 I have talked about gold on this blog in the past.

In North America there are those who eschew gold/silver as an investment and claim that "gold's only use today is as an inflation hedge as record debt depresses currency values, until fiscal order is restored."

They are right. The problem though is that people are starting to realize that it is going to be a long, difficult time until 'fiscal order' is restored.

As you peruse the blogosphere, articles can be divided into one of two sides of a philosophical fence. On one side the argument that we are slipping into deflation. The other, inflation.

I guess you could say it appears I sit on the fence. A deflation/inflation symbiotic relationship, if you will.

The problem is to look ahead and assess how things will play out. After that you make you decisions on how best to prepare for what is coming.

On July 8th I made a post about the austerity/stimulus debate. To me, there is no debate... there will be a second round of massive stimulus.

And because of that I would suggest that you will see the Euro roar back towards a high and the US Dollar will sink to new lows because. I think it's unavoidable because the financial condition of the USA dwarfs the problems of Europe.

Loss of confidence in a currency can be brought about by many reasons, but there is one constant factor. When hyperinflation has occurred in modern history EVERY economy involved was decimated as and when it occurred.

Everyone talks about the world wide economy falling into deflation. The fear is that the US Federal Reserve is out of ammunition to fight deflation.

The US Federal Reserve can (and will) do Quantitative Easing to infinity. Nothing can restrict them on this. And the European Central Bank will not be far behind in following their lead.

You can argue all you want about deflation, but the next response by the US Federal Reserve is not that hard to predict (Bernanke has already written about it - his famous speech on the matter is where the nickname 'Helicopter Ben' came from).

'Loss of confidence' is what is driving the interest in gold.

And that 'loss of confidence' is starting to manifest itself in the United States itself.

In mid-Michigan they are starting to take matters into their own hands. As ConnectMidMichigan reports, "New types of money are popping up across Mid-Michigan and supporters say, it's not counterfeit, but rather a competing currency. Right now, you can buy a meal or visit a chiropractor without using actual U.S. legal tender."

Minted by private mints, people are to buy and sell goods with pure silver coins. In one simple act they have completely bypassed the destabilizing influence of the domestic currency printers known as the US Federal Reserve.

Dave Gillie, owner of Gillies Coney Island Restaurant in Genesee Township talks about it in the article.

The U.S. Treasury Department says the Coinage Act of 1965 says "private businesses are free to develop their own policies on whether or not to accept cash, unless there is a state law which says otherwise."

And in Michigan, they are starting to use things other than US dollars.

"I sell three or four (of the non-US government silver coins) every single day and then I get one or two back a week," said Gillie.

The is a trend starting. Gold is starting to be used as money. For food... and to load up your gas tank.

So why is there interest in these competing currencies?

I would suggest that events are clearly pointing to a point where QE2 is unavoidable and with it will come a crisis of confidence in the US dollar.

It means inflation and a spike in the value of gold/silver.

To me it seems you want to position yourself to take advantage of these two, apparently unavoidable, trends.

Email ThisBlogThis!Share to TwitterShare to FacebookShare to Pinterest
Labels: gold, US Dollar, US economic stimulus, US Federal Reserve