It's Winter... but things are heating up. 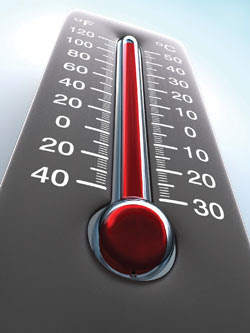 So what the hell happened yesterday?

Last week you will recall this post I made and how I commented that the precious metal markets have become almost comically predictable lately and that Tuesdays were raid-free days.

You have JP Morgan (with their massive buying of shorts to drive down price) squaring off against some very large buyers who step in and counter the downward manipulation with strong buying.

These two forces are the primary drivers of price right now and there is almost a predictable pattern to what goes on. Lately JP Morgan raids the market twice daily between approximately 8:00am EST and 9:00am EST. Once that happens, the large buyers step in and buy the dips driving the price of silver back up.

In that post last week, I showed you Wednesday Dec 29th, 2010. Silver was raided at precisely 8:20 EST, taking $0.11 out of the price in under a minute. As usual, they sat back and watched for five minutes and then struck again at 8:25am, taking out another $0.11 in about 30 seconds. Then the large buyers stepped in and silver rebounded. (click on all charts to show an enlarged version) 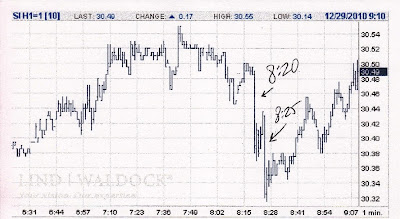 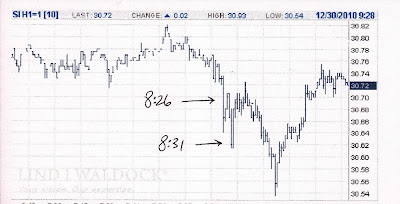 Silver ended the week, the month and the year at $31.90, the highest year end level ever.

This was NOT how the year was supposed to play out. In June, 2010 (when silver was sitting at $18 an ounce) J.P. Morgan analysts gave silver a long-term price forecast of $13 an ounce.

Then along came the CFTC with their investigations into manipulation of the markets.

It is no small coincidence that, with the scrutiny of the CFTC, the pattern of shorting silver by J.P. Morgan was restricted.

As mentioned last week, an analyst I follow observed that gains in silver are often made early in the week and selling usually occurs later in the week. The pattern repeats so frequently that it was clear it was not coincidence.

He concluded that J.P. Morgan was trying to hide their malicious intent from the weekly Commitment of Traders report. This is a report on the market that comes out every Friday but it is based on the previous Tuesday. So, any new short positions initiated JP Morgan on a Wednesday will not show up on the CoT until the next Friday. Thus JP Morgan has until the next Tuesday to cover any brand new shorts they just initiated if their raids fail.

So every week, down go metals mid-late week on fresh paper-metal selling; up go metals early the following week. If shenanigans fail, the shorts are covered before new CoT survey.

This week that pattern changed.

While Canadian stock markets were closed on January 3rd, the precious metal markets were open. As you would expect, Silver was raided right on time at approx 8:25am EST and then again 5 minutes later (times are not marked on the chart for Jan 3rd). There was also a third significant hit at approx 8:55am EST: 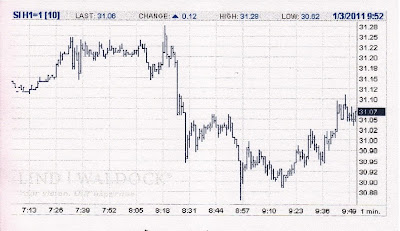 As the day wore on, some very significant developments emerged.

Scotia Mocatta's latest technical note forecast came out and stated that "the next major [Silver Price] target remains the 1980 high of $49.50."

Combine that sort of speculative fervour with what happened at the US Mint on Monday.

The mint can suspend the first 2 but cannot by law stop the 3rd as it is compulsory for them to mint bullion coins with available silver from the USA.

Well... Monday was the first day of the New Year for coin sales. And sell coins they did. The US Mint reported it sold nearly 1.7 million Silver Bullion coins on Monday, the first day of American Eagle 2011 sales – equal to almost 5% of 2010's entire silver coin sales.

But all that is only fodder for the big news on Monday.

On December 16, 2010 the Commodity Futures Trading Commission introduced its plan to curb speculation in metals, agriculture, and energy markets. But at the meeting, Chairman Gary Gensler abruptly postponed a vote on the proposal.

Commissioner Chilton, the most vocal proponent of cracking down on speculators, was key to the postponement as he told Reuters he would have voted against the plan. It would have included a two-step approach to allow more time for the agency to gather information on the opaque swaps market.

Confirmation that he had, indeed, changed his position was announced Tuesday.

"While I will now support publishing a position limit proposal for public comment, I will continue to make the case that we need to address excessive speculation in these markets immediately," Chilton said in a statement.

Chilton's decision will now allow the CFTC to go ahead with a 60 day period of public input (which will solve nothing, but is part of the process).

The key element here is that it allows J.P. Morgan to become a little more bold in their attacks, knowing that they have another 60 days to carry out their nefarious activities.

And with Silver and Gold catching fire, urgent action was needed.

That boldness started on Monday with the three attacks on Silver.

In the overnight trading, Silver was also attacked in the Globex.

And then - for the first time in 4 months - Silver had raids on a Tuesday. 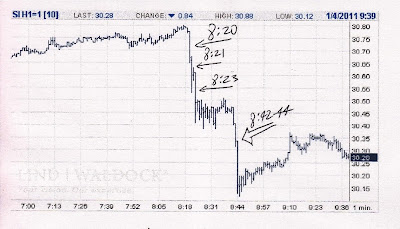 Really? Seriously? I mean... c'mon... a monkey can see the break from regular trading patterns as the paper shorts attack. The fact these come at almost the exact same time each day only makes it that more obvious.

As I have said, 2011 will set the stage for some violent swings in the price of silver and gold (gold was hit the same way).

And now we get to the signal that things are really getting desperate.

Besides these shenanigans, what really caught my eye yesterday was the placement in yesterday's media of a series of anti-metal news articles like this one from Bloomberg. 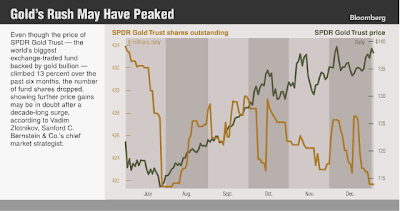 This is no coincidence that these articles came out today. They are timed placements.

When the BC Liberals were in opposition at the end of the 1990s, I was involved in several presentations to the BC Liberal Caucus.

It was an educational experience... watching the way the media process and political game was played.

On four seperate occasions we were invited to attend the Legislature. Our presence in the gallery would be announced at the start of the session as part of the Question Period introductions. We had been tasked the week before with meeting certain media reporters with the theme of our issue. The morning of our apppearance in Victoria, several articles about our issue would 'appear' in Victoria and Vancouver newspapers. After Question Period, after government Minister's had been grilled on our issue, the press would follow up on what had happened in the Legislature. Coverage of our issue would splash across the newspapers for the next 3 days in articles and Op Ed columns as a result of the interest generated from Question Period.

It was all part of the highly scripted art of media manipulation.

I saw some of the same thing happening in precious metals yesterday.

A hard core, co-ordinated attack on precious metals combined yesterday with a timed media blitz that attempted to create a gold/silver selling frenzy.

It's a sign of how concerned the cartel is becoming.

One analyst of the Comex I follow had this to say last night:

The paper short raids trigger dramatic immediate drops in the silver price. These drops trigger selling by investors who have placed automatic stop loss levels on their investments. The selling induced by the stop losses trigger a further drop in metal prices. And as a the media simultaneously floods the medium with stories that gold/silver are ready to crash, panic selling triggers further losses and - the cartel hopes - more selling.

Personally I wasn't expecting this until February. But for the reasons I have outlined above, the fireworks are getting started right off the bat with the New Year.

The problems have not gone away.

And neither will the interest in both gold and silver.

As always, the content on this site is provided as general information only and should not be taken as investment advice. All site content, including advertisements, shall not be construed as a recommendation to buy or sell any security or financial instrument, or to participate in any particular trading or investment strategy. The ideas expressed on this site are solely the opinions of the author(s) and do not necessarily represent the opinions of sponsors or firms affiliated with the author(s). The author may or may not have a position in any company or advertiser referenced above. Any action that you take as a result of information, analysis, or advertisement on this site is ultimately your responsibility. Consult your investment adviser before making any investment decisions.

The author(s) of the posts on this site are not investment advisors and they do not offer investment advice. They try to provide some hopefully useful data with sources - especially concerning real estate - and then add their own analysis.

All the content on this website is solely an expression of the author's personal interests and is posted as free-of-charge opinion and commentary. Nothing here is intended as investment advice. If you seek investment advice, consult a registered, qualified investment advisor.