Time for the government to get out of the mortgage game? 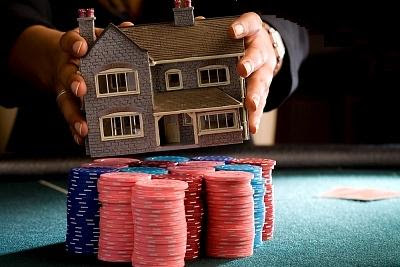 As you know, Bank of Canada Governor Mark Carney has been sounding warnings about Canadian debt levels. The concern? Escalation of household debt is a risk to Canadian financial stability when interest rates begin to rise.

This was followed by the International Monetary Fund weighing in and identifying Canada's stretched household balance sheets as a near-term risk to our nation's financial system.

Not only were average Canadians scolded for taking on too much debt in this era of emergency interest rates, but banks were cautioned to curtail lending.

The response by some bank CEO's was to call on Finance Minister Jim Flaherty to tighten lending standards for residential mortgages, such as a reduction in amortization periods.

The banks claimed they were unable to individually take action because of the competition between them for that debt business.

In a year-end interview Flaherty countered:
The Financial Post article summarizes the problem which the blogosphere has been harping on now for several years.

Banks won't curtail lending because they are protected by the Canadian Mortgage and Housing Corporation (CMHC). The government-backed mortgage insurance is mandatory for all mortgages with a loan-to-value ratio in excess of 80%. Because of that, the conventional incentive for banks to set their own underwriting standards and monitor risk exposure has simply been washed away.

Rather than screening mortgage applications for risk, bank staff simply tick the boxes required by government. At most, banks have an indirect interest in assessing credit risk since households with too much mortgage debt may be more at risk of defaulting on other loans such as credit cards.

This is why the bloggers laugh at the assertions about Canada's 'sound banking system'.

The Financial Post article cuts right to the heart of the matter with a succinct observation:

This is exactly what the problem was in the United States with Freddie Mac and Fannie Mae.

As long as the government insists on backstopping the risk of high-ratio mortgages with taxpayers' money, banks won't take action. The banks will continue to sell as many high-ratio mortgages as they can, knowing that taxpayers will ultimately pay the price if rising household debt creates problems in the future.

The Financial Post suggests the time may have come for the government to begin exiting the business of insuring mortgages and providing government guarantees.

But will the voting public, now addicted to the crack cocaine of low interest debt, allow them to?

Sounds to me like we're back to square one with everyone pointing fingers and nobody taking any action.

Please read disclaimer at bottom of blog.
Posted by Whisperer at 12:34 PM