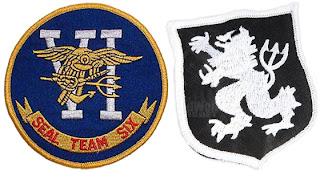 Completely off topic from what is normally posted here, but interesting notwithstanding.
A Navy Seal has come forward and offered a different account of the events that transpired when Osama Bin Laden was executed and is highly critical of the political attempts to leverage the PR value of the event.
===============================
Correcting the ‘fairy tale’: A Navy SEAL’s account of how Osama bin Laden really died
Forget whatever you think you know about the night Osama bin Laden was killed. According to a former Navy SEAL who claims to have the inside track, the mangled tales told of that historic night have only now been corrected.
“It became obvious in the weeks evolving after the mission that the story that was getting put out there was not only untrue, but it was a really ugly farce of what did happen,” said Chuck Pfarrer, author of Seal Target Geronimo: The Inside Story of the Mission to Kill Osama Bin Laden.
In an extensive interview with The Daily Caller, Pfarrer gave a detailed account of why he believes the record needed to be corrected, and why he set out to share the personal stories of the warriors who penetrated bin Laden’s long-secret compound in Abbottabad, Pakistan.
In August the New Yorker delivered a riveting blow-by-blow of the SEALs’ May 1, 2011 raid on bin Laden’s hideaway. In that account, later reported to lack contributions from the SEALs involved, readers are taken through a mission that began with a top-secret helicopter crashing and led to a bottom-up assault of the Abbottabad compound.
Freelancer Nicholas Schmidle wrote that the SEALs had shot and blasted their way up floor-by-floor, finally cornering the bewildered Al-Qaida leader:

“The Al Qaeda chief, who was wearing a tan shalwar kameez and a prayer cap on his head, froze; he was unarmed. ‘There was never any question of detaining or capturing him—it wasn’t a split-second decision. No one wanted detainees,’ the special-operations officer told me. (The Administration maintains that had bin Laden immediately surrendered he could have been taken alive.) Nine years, seven months, and twenty days after September 11th, an American was a trigger pull from ending bin Laden’s life. The first round, a 5.56-mm. bullet, struck bin Laden in the chest. As he fell backward, the SEAL fired a second round into his head, just above his left eye.”

Please read disclaimer at bottom of blog.
Posted by Whisperer at 12:32 PM