"Residential property prices are in freefall in China" - Forbes 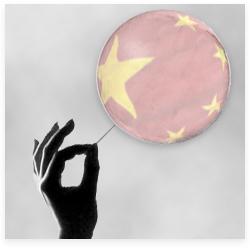 On Saturday we talked about how the Real Estate in China appears to be starting the process of bursting.
Coverage of this issue has been growing since early summertime.
In mid June the UK newspaper the Daily Mail ran a story titled 'China's ghost towns: New satellite pictures show massive skyscraper cities which are STILL completely empty'.
Recently we had this TV news story reporting the fact that property values in Shanghai are crashing:
And, as Forbes reported yesterday, the problem is not just limited to Shanghai but is spreading throughout China:

"Residential property prices are in freefall in China as developers race to meet revenue targets for the year in a quickly deteriorating market."

Forbes is reporting that China's largest builders began discounting homes in Shanghai, Beijing, and Shenzhen in recent weeks, and the trend has now spread to second- and third-tier cities such as Hangzhou, Hefei, and Chongqing.
In Chongqing, for instance, Hong Kong-based Hutchison Whampoa cut asking prices 32% at its Cape Coral project.
Property Consultant Alan ChiangSheung-lai told the South China Morning Post that:

“The price war has begun.”

What started slowly at the end of summer has now turned into a rout. The middle of October is normally a good time for sales, but Shanghai developers started to slash asking prices instead.
Analysts expected falling property values to move China's Premier, Wen Jiabao, to relax tightening measures intended to cool the market. China has increased mortgage rates and put prohibitions on second-home purchases.
So far Wen Jiabao is unmoved.
After a State Council meeting on October 29, 2011 Mr. Wen affirmed the policy, stating that local authorities should continue to:

“strictly implement the central government’s real estate policies in the coming months to let citizens see the results of the curbs.”

The announcement turned an escalating drop in prices in mid-October into an earnest spree of panic selling over the past 15 days as desperate developers begin competing among themselves to unload inventory.

Over the past week and a half stunning price cuts are turning up everywhere. One builder — Excellence Group — even said it would sell flats in Huizhou at its development cost.
Citi’s Oscar Choi believes prices will decline another 10% next year, but that’s a conservative estimate. State-funded experts are far more pessimistic. For example, Cao Jianhai of the prestigious Chinese Academy of Social Sciences sees price cuts of 50% on homes if the government continues its cooling measures.
If China's 'approved' analysts are saying prices could halve in a few months; you can be rest assured they believe the eventual sell-off will be worse.
Legendary investor Jim Chanos has long been bearish on the China Real Estate market and has said that China will be “Dubai times 1,000—or worse”. He has said that what will play out is the unwinding of “the biggest housing bubble ever created”.
Anyone who thinks this will not be felt in North America is simply deluding themselves. As Time has noted:

"if the bubble pops, it will have serious consequences in the U.S. America sold $92 billion in goods and services to China last year. If China succeeds in moving away from its model of cheap land and cheap capital and makes a smooth transition to an economy based more on domestic demand, hallelujah. But if Chinese land prices plummet, there will be less demand for raw materials and a steep decline in world commodity markets and global trade in general."

And as this blog wrote on Saturday - when China's Real Estate values collapse, many of China's investors will have serious credit problems. As those credit problems mount, assets will have to be liquidated to pay debts. Given the choice between liquidating assets at home and liquidating assets abroad... assets abroad will most often be liquidated first.
Does anyone seriously believe that Vancouver won't be significantly affected by a rash of Asian owned property liquidations in our city?
Anyone, besides Ozzie Jurock, that is.
==================

Please read disclaimer at bottom of blog.
Posted by Whisperer at 2:53 PM