Who will bail out the US Federal Reserve? 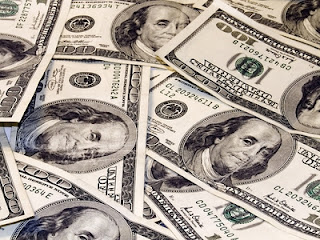 Came across an interesting editorial by James Rickards, senior managing director of Tangent Capital and author of the book 'Currency Wars'. Rickards asks some interesting questions about how the US Federal Reserve funds itself.
= = = = = = = = = = = = = = = = = = =
From Occupy Wall Street to the halls of Congress there is anger at bailouts orchestrated by the U.S. Federal Reserve. These bailouts have not been limited to banks but include brokers, money market funds and foreign corporations. The Fed has released details grudgingly and some disclosures were forced by the Dodd-Frank legislation. Gradually the bailouts have been revealed as if a veil were slowly being drawn to display a densely formed mosaic. The bailouts have enriched stockholders, bondholders and CEO’s while unemployment remains at depression levels and forty-six million Americans survive on food stamps.
But what if the Fed itself needed to be bailed-out? The Fed may be a central bank, but it is still a bank with a balance sheet and capital. A balance sheet has two sides consisting of assets and liabilities. The Fed’s assets are mostly government securities it buys and its liabilities are mostly the money it prints to buy them. Capital consists of the assets minus the liabilities.
The Fed has capital of about $60 billion and assets approaching $3 trillion. If the Fed’s assets declined in value by just 2 percent, that decline applied to $3 trillion in assets produces a $60 billion loss—enough to wipe out the Fed’s capital. A 2 percent decline is not unusual in today’s volatile markets.
The Fed is well aware of this problem. In 2008, the Fed met with Congress to discuss propping up its balance sheet by issuing its own bonds as the Treasury does now. By getting permission from Congress to issue new Fed Bonds, the Federal Reserve could tighten monetary conditions when the time came without having to sell the bonds on its books and realize losses. Sales of the new Fed Bonds would replace sales of the old Treasury bonds to reduce the money supply. This way, the losses on the old Treasury bonds would stay hidden.
In 2009, Janet Yellen, now a member of the Fed board, went public with this request in a New York speech. Regarding the power to issue new Fed Bonds, Yellen said, “I would feel happier having it now.” Yellen seemed eager to get the program under way, and with good reason. The Fed’s looming insolvency was becoming more apparent by the day as it piled more leverage on its capital base.
This bond scam was shot down on Capitol Hill, and once it failed, the Fed needed another solution quickly. The answer was a deal struck between Treasury and the Fed that did not require approval from Congress.
The Fed earns huge profits every year on the interest received on Treasury bonds the Fed owns. The Fed normally pays these profits back to the Treasury. Behind closed doors, the Fed and Treasury agreed that the Fed could suspend the repayments and keep the cash. The amount the Fed would usually pay to the Treasury would be set up as an IOU.
Now as losses on future bond sales arise, the Fed does not reduce capital, as would normally occur, instead they increase the amount of the IOU to the Treasury. In effect, the Fed is issuing private IOUs to the Treasury and using the cash to avoid appearing insolvent. As long as the Fed can keep issuing these IOUs, its capital will not be wiped out by losses on its bonds. Corporate executives who played these kinds of accounting games would be sent to jail. Americans might be outraged to know that the Treasury is a public institution while the Fed is privately owned by banks, so this accounting sham is another example of bilking the taxpayers to enrich the banks.
The United States now has a system in which the Treasury runs huge deficits and sells bonds to keep from going broke. The Fed prints money to buy those bonds and loses money owning them. Then the Treasury takes IOUs back from the Fed to keep the Fed from going broke. This arrangement resembles two drunks leaning on each other so neither one falls down. Today, with its 50-to-1 leverage and investment in volatile securities, the Fed looks more like a poorly run hedge fund than a central bank.
Even this Treasury lifeline to the Fed may not be enough in the long run. If the Fed begins a new round of money printing and the Treasury continues with trillion-dollar plus deficits, there may come a time when even the credit of the Treasury and Fed are called into question and the money printing circus grinds to a halt. At that point the Fed could “phone a friend” at the IMF and be bailed out by a kind of IMF funny money called “special drawing rights” or SDR’s, or the Fed could use its nuclear option and go back to the gold standard using the gold in Fort Knox. Given the limited amount of gold and the huge amount of paper money that would have to be backstopped, the new gold price would be $7,000 per ounce or higher. These kinds of spikes in the price of gold during money crises have happened before – in 1930’s and the 1970’s. Those crises were forty years apart and the last one was forty years ago so a new crisis in the near future would be right on time.

Please read disclaimer at bottom of blog.
Posted by Whisperer at 2:48 PM