The Surging Demand for Silver in China 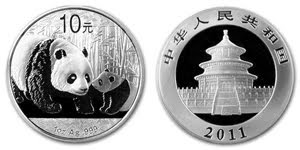 It has been an incredible week in Euroland and we haven't written much lately about Gold and Silver.
Obviously if you follow this blog, you know we remain highly bullish on the prospects for both metals. There may be some short term issues as positions are liquidated in the MF Global bankruptcy, but one only have to look at how the Chinese are desperately acquiring the metals to understand what lies on the horizon.
Dan Collins, over at the blog Financial Sense, recently took a look at Silver and China.
Collins notes that Chinese investment in silver has exploded since last year, with the trading volume going exponential.
The China Daily reported yesterday that the trading volume of silver forwards on the Shanghai Gold Exchange (SGE) surged 751% year-on-year in 2010. Meanwhile, the volume in September of this year was more than six times that of the same period in 2010.
That is a stunning demand for Silver.
Chinese commercial banks are now selling silver to investors in the hundreds of tons. One example is the Industrial and Commercial Bank of China Ltd (ICBC), China's biggest lender which launched paper silver trading for individual investors in August of last year.
The other large Chinese Banks have also introduced silver trading. The trading volume of ICBC's paper silver products alone reached 300 tons in the first half of 2011, almost four times the figure for the whole of 2010.
That's right, one Chinese bank alone sold 300 tons or over 10.5 million ounces of silver in only 6 months.
In only their first year of trading, ICBC bank alone will sell over 20 million ounces of silver which alone would represent over 2% of the total amount of silver mined on earth for the entire year.
The key factor to pay attention to is that most of these silver purchases are forward contracts and not the actual physical silver. What happens when Chinese investors demand physical silver instead of paper silver?
Demand for precious metals in China is skyrocketing. High inflation and a lack of investment options are feeding the demand.
With new housing regulations bringing housing investment to a standstill, investors are looking for new ways to invest cash. The housing market looks to go down and the stock market is widely viewed as corrupt and risky.
Gold and silver are becoming increasingly popular.
It's yet another reason why we remain bullish on the prospects for Silver.
==================

Please read disclaimer at bottom of blog.
Posted by Whisperer at 11:58 PM