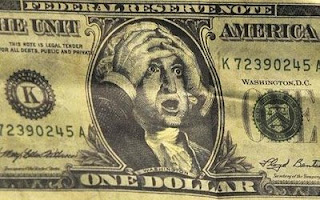 Last Saturday we made reference to a Zero Hedge article that commented about what was then a record $77 billion in Treasury sales from the Fed's custody account.
The obvious conclusion from that data is that, contrary to what one hears in the media, foreigners are offloading US paper hand over fist.
ZH then wondered, if Treasurys are being dumped, "what they are converting the USD into, and how much longer will the go on for? The last thing the US can afford is a wholesale dumping of its Treasurys."
The concern is that the traditional diagonal rise in foreign holdings of US paper has not only pleateaued, but it is in fact declining: a first in the history of the post-globalization world.
Well here we are a week later and as of yesterday's H.4.1 update, the outflow has increased to it's 6th consecutive week by yet another $8 billion to a new all time record of $85 billion.
The 6 consecutive weeks of outflows is now tied for the longest consecutive period of outflows from the Fed's Custody account ever.
This week's sale brings the total notional of Treasurys in the Custody account to just $2.66 trillion (down from a record $2.75 trillion) and the same as April of last year.
And since the sellers are countries who have traditionally constantly recycled their trade surplus into US paper, this is quite a distrubing development.
As ZH notes, it is getting increasingly more difficult to ignore this disturbing trend, especially with US bond auctions mysteriously pricing at record low yields month after month.
==================