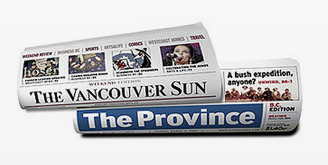 "Over the last years, the Vancouver Sun and The Province have seen alarming and unprecedented revenue declines... the business is unsustainable... we must take immediate steps to stop the bleeding."

Ever heard of Newspaper Death Watch? It's an intriguing US-based website that tracks the dying newspaper industry in the United States.

In each case a predictable chain of events usually precedes the death of a paper: Journalists are sacked, newsgathering budgets are cut, pagination is reduced, and potential consumers are excluded by price rises – there are survivors, but for how long?

That's a question that will now be asked locally.

Staff at The Vancouver Sun and The Province newspapers have been told to expect another round of layoffs because the current business is unsustainable.

In a message to staff issued on Wednesday, Pacific Newspaper Group president and publisher Gordon Fisher said the papers are facing alarming declines in revenue from print advertising and if the trend continues the businesses are unsustainable.

"I would be less than honest if I failed to point out that, as an example, our productions costs are dramatically higher than those of our peers. As one small but enlightening example, we are not in the insert business because it is impossible to profitably compete due to our costs."

It's sad to watch the major dailies go the way of the video rental store. And it's not just the Vancouver papers.  As Garth Turner noted today:

Postmedia, owners of the BC papers and slew of others, is bleeding $1 million per week. Advertising has fallen another 14% in the past year. Meanwhile the nation’s largest newspaper, the Star, has just announced its own ‘please-quit’ program for employees and is actually farming out production of its pages. The Globe, as you know, erected a paywall around its web site, as it also jettisoned staff.


CTV has recently laid off on-air people, camera operators and radio hosts. The CBC’s been punting 650 employees for the past year. And Rogers, with a massive cable monopoly, shocked workers months ago with hundreds of layoffs.

The point is that revenue models no longer work for traditional media organizations because they’re based on eyeballs. As readership and viewership wither, so do the ad dollars. Gone are the days when everybody in town had the same morning paper tossed on their doorstep, or tuned in to the same supperhour newscast.

Part of the reason is the proliferation of new vehicles... Another reason: print and TV newsrooms are whoring themselves. As media turns from useful, original content to the delivery of advertising messages, it gets irrelevant and annoying. If a paper wants to succeed, the last person shown the door should be a reporter. These days they lead the exodus.

And that's the crux of it.

The industry has also failed to keep pace with changes in technology, a revolution that has meant that readers accustomed to waiting for a daily newspaper can now receive up-to-the-minute updates from web portals, bloggers and services such as Twitter.

There is still a vibrant, profitable role for news in today's society.

But can the daily papers seize on it?

Are these layoffs the first steps in a move to re-organize and capitalize on this need or will the Sun and Province be going the way of Blockbuster?

Continuing to shovel out 'newsvertizing' in place of actual news guarantees it will be the latter.

Instead of real estate, maybe one of the Vancouver Sun's last photo gallery's will contain these types of photos.


Please read disclaimer at bottom of blog.
Posted by Whisperer at 8:24 PM

Email ThisBlogThis!Share to TwitterShare to FacebookShare to Pinterest
Labels: Death of the newspapers