Who ya gonna trust? 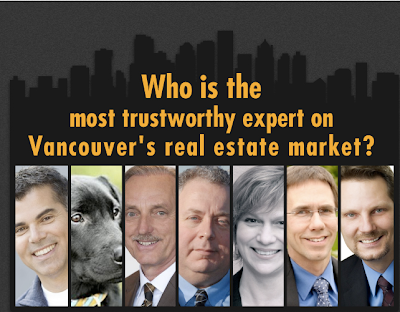 The blog buzzbuzzhome is running an online poll asking "Who is the most trustworthy expert on Vancouver's real estate market?"

This follows a similar poll done on Toronto's market.

BuzzBuzzHome (BBH) promotes itself as a blog

They have graciously added this blog to the list of options to vote for in their poll. In describing each entry, here is how our blog is summarized (click on image to enlarge):

BBH notes notes that we are "an outspoken critic of Vancouver's housing market and the way much of the media covers it. This anonymous blogger was the first person to question the authenticity of two 'condo buyers' who turned out to be employees of MAC Marketing."

The MAC Marketing Solutions scandal (we call it MAC-gate) certainly propelled our daily musings into the mainstream.

But it must be noted that the MAC misrepresentation was first spotted by the local online community and then dissected on local blogs, message boards and comment sections.

Sharp eyed contributors noticed that a Google search of one of the women named in the media stories turned up her Facebook and LinkedIn pages – both since deleted – which stated she actually worked at MAC.

This blog merely took that information, wove it together, and presented it in several readable posts.

When people ask "who is the Rainforest Whisperer or Village Whisperer," there is no single answer.

As in the MAC-gate episode, we merely act as a clearing house for the information presented on such excellent venues as Vancouver Condo Info, the Vancouver Real Estate Anecdote Archive, Vancouver Price Drop, Real Estate Talks - British Columbia, YVR Housing Analysis, Vancouver RE and then some, Canada Watchdog, as well as statistical information from various realtors like Paul Boenisch, Larry Yatkowsky, and Arnold Shuchat.

From these and other sources, this blog tries to bring you the information that you aren't getting in the mainstream press about real estate and economic policy.

Yes, we have a definite bearish outlook on the immediate future for real estate in our fair city. It's an outlook borne of an understanding that our housing bubble has been inflated by a government economic policy that has driven housing values into the stratosphere by making extraordinary levels of credit available to home buyers. That excess credit can't continue forever.  And it's unwinding is going to hurt everyone, whether they own real estate or not.

As part of our efforts we skeptically examine and, where necessary, attack the flaccid institution that journalism has become, particularly as it relates to real estate.

We are criticized for remaining anonymous. But as the fabulous financial blog Zerohedge notes,

anonymity is a shield from the tyranny of the majority. it thus exemplifies the purpose behind the bill of rights, and of the first amendment in particular: to protect unpopular individuals from retaliation - and their ideas from suppression - at the hand of an intolerant society.

Though often maligned (typically by those frustrated by an inability to engage in ad hominem attacks) anonymous speech has a long and storied history in Canada and the United States.

Anonymous speech has been used by in the US by the likes of Mark Twain (aka Samuel Langhorne Clemens) to criticize common ignorance, and perhaps most famously by Alexander Hamilton, James Madison and John Jay (aka Publius) to write the federalist papers.

Local industry heavyweights like Bob Rennie rail against this anonymity, as you can see from this passage from a Rennie speech to the Urban Development Institute May 17th, 2012:

I do have a huge concern over what Tracie McTavish, the president of our company calls, your “Keyboard Courage”, referring to what is becoming a dangerous and apparently acceptable practice which is, negative market commentary that is nothing but speculation.


Speculation made by spineless, signature‐less, individuals on a blog, on a blog that in most cases has less than 500 followers.


Then the next thing you know, the mainstream media picks up on the negative as fact and all of a sudden, it’s breaking news and our industry spends the next 6 months attempting to dispel the rumors and sound bites.

You can understand Bob Rennie's frustration. He can't influence the anonymous blogger or buy them out like he has done with others.

Nor can he divert attention from the issue at hand by attacking the messenger instead of focusing on the message.

As Zerohedge observes, "the right to remain anonymous may be abused when it shields fraudulent conduct. but political speech by its nature will sometimes have unpalatable consequences, and, in general, our society accords greater weight to the value of free speech than to the dangers of its misuse."

This blog strives to present a cornucopia of information related to real estate that isn't filtered by the marketing arm of the industry's professional associations.

We are, indeed, a collection of Whispering Villagers.


Please read disclaimer at bottom of blog.
Posted by Whisperer at 4:44 PM