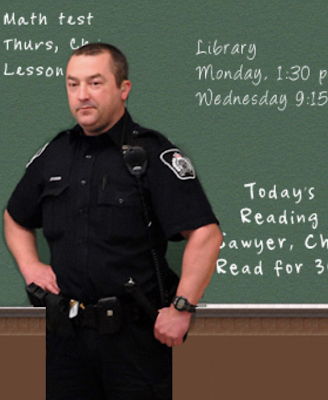 Your dutiful scribes had a very odd twitter exchange on the weekend, so today's post is a departure from our regular fare.

This past weekend, as people across North America paused to remember the one year anniversary of the mass shooting at Sandy Hook Elementary School in Newtown, Conn, Cst. Atkinson posted a very odd and disturbing tweet on his twitter account.

Atkinson's tweet says, "In an effort to update my skills as a School Liaison Officer I have just completed a 5 day course improving my rifle skills."

In an effort to upgrade you School Liaison skills you've just completed a 5 day course improving your 'rifle' skills?  Were we reading this correctly?  How are marksman 'rifle' skills relevant to being a school liaison?

Even more disturbing, the message was retweeted by the Delta Police media relations officer (implying support for the tweet). 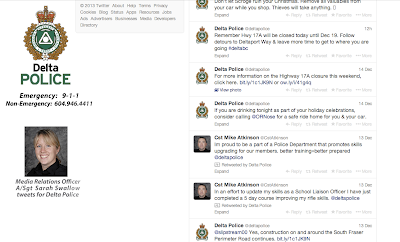 So we sought clarification.  We asked if the Cst. was preparing for a Canadian Sandy Hook (in light of his not so tactful tweet on this, the one year anniversary of the massacre):

Cst. Atkinson's reply, "we update all of our skills whenever we can. Including ones to protect our schools.":

We spoke with a number of people about this over the weekend, parents and non-parents alike, and every single one was greatly disturbed by this tweet.

Why did the Delta Police Department sanctioned this tweet on the one year anniversary of this horrible event? Is it because our police believe a similar Sandy Hook style school massacre in the Lower Mainland is an impending threat?

Do the police have information that make marksman rifle skills a necessary component of School Liaison Officer training? Since the rifle training is a part of his School Liaison training is Cst. Atkinson bringing a rifle to school with him?


Please read disclaimer at bottom of blog.
Posted by Whisperer at 9:14 PM