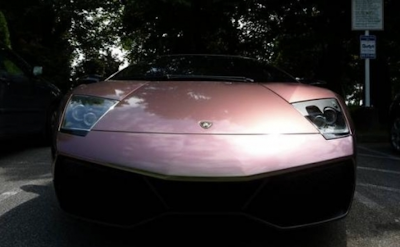 About a month ago there was a bit of interest created when this Craigslist ad appeared offering a Lamborghini Murcielago LP670-4 Superveloc for sale for $388,888 (click on image to enlarge). 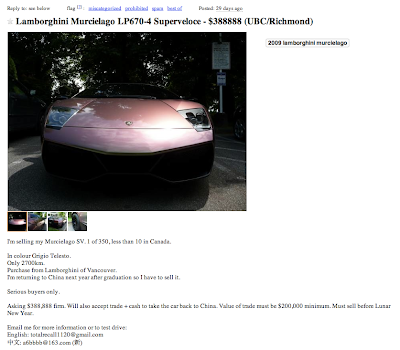 “I'm returning to China next year after graduation so I have to sell it. Serious buyers only. Asking $388,888 firm. Will also accept trade + cash to take the car back to China. Value of trade must be $200,000 minimum. Must sell before Lunar New Year.”

To many it was another sign of the Hot Asian Money (HAM) that is credited with massively inflating property values here.  It is almost a Vancouver sport to spot Lamborghini driven by young Asian men sporting the new driver 'N' label which all people must display when the originally obtain a driver's licence. 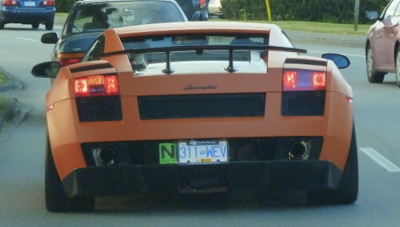 It is the quintessential emblem that rankles regarding the whole issue of HAM. But is the November 11th Craigslist ad, which has gone somewhat viral since it's posting, legit?

Ian Young, who writes a blog for the South China Morning Post from Vancouver called "The Hongcouver", says evidence now suggests the ad is a fake.

Emails to the two addresses listed with the posting now go unanswered. However, the University of British Columbia’s student newspaper said it received a response from someone who claimed that the ad had been posted by a friend as a prank.

GTSpirit (a sports car website which extensively covered the Craigslist ad) eventually published a retraction of sorts: “We have since found out that the car is not really for sale and was instead posted by a friend of the former owner.”

Email ThisBlogThis!Share to TwitterShare to FacebookShare to Pinterest
Labels: Lamborghini