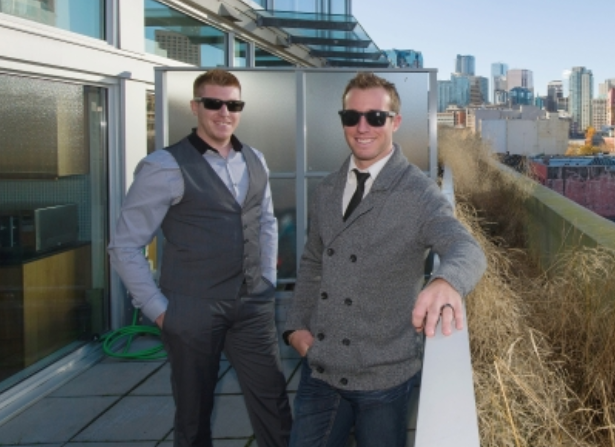 They are the realtor brothers (Russ Macnab and Jordan Macnab) who in November 2012 dreamed up the "Crib Crawl",  a real estate marketing gimmick that fused a pub crawl with open houses.

Two Metro Vancouver realtors are taking a group of about 30 potential homebuyers out for a night on the town that includes drinks, appetizers and a limo ride. Along the way, the group will visit The Pint pub, as well as five funky homes that are for sale in Vancouver.


The “crib crawl” is an attempt by realtor brothers Jordan and Russ Macnab to attract potential buyers in a slow real estate market. It’s not the only tactic realtors are trying — others have offered kayaks and bicycle giveaways and free gym memberships with home purchases.


“The market is dead right now, so we’ve got to do something. Buyers are really hesitant,” Macnab said. “We’re trying to generate some traffic by thinking outside of the box.”

Yeah… get them plastered as a way of lowering buying inhibitions. Awesome.

Well our gimmicky R/E duo is back with their latest attention getting sales tool… drones. Specifically making real estate sales videos with drones:

It's an eye-catching idea and certainly certainly one can image a successful niche market for a professional multimedia producer.

CTV News thought it interesting enough to profile them on last night's news. It's a concept that has been gaining popularity in the United States and it's a premise with promise.

The brothers hire a crew to help out with the production of each video, and Russ, the self-described “techie” of the brothers, operates the drone.

“You can use them in apartments and lofts, stuff like that, but where it comes into play is with these big mansions that have awesome yards and huge pools and grand entrances that I can fly through the front door,” he said. “Those are the houses that are gonna stand out and make use of that.”

Just one small problem tho… you must obtain a special permit from Transport Canada every time you use your drone for commercial purposes. They’re even required to submit a flight plan of the drone’s path through the homes if you want to shoot hovering video from one room to the next. But presumably the red tape is worth it for the brothers:

Their promotional video says they've been at if for a year, but it seems the video business hasn't been a big success - yet.

Well, hopefully their optimism is well placed.  Because if you read between the lines they clearly aren't having too much success closing on actual real estate sales. Hence the branching out into real estate video production.

As it is, these two seem to have mastered self-promotion.


Please read disclaimer at bottom of blog.
Posted by Whisperer at 6:26 PM