Now it's the Chinese Millionaires in Richmond banding together and threatening to sue. 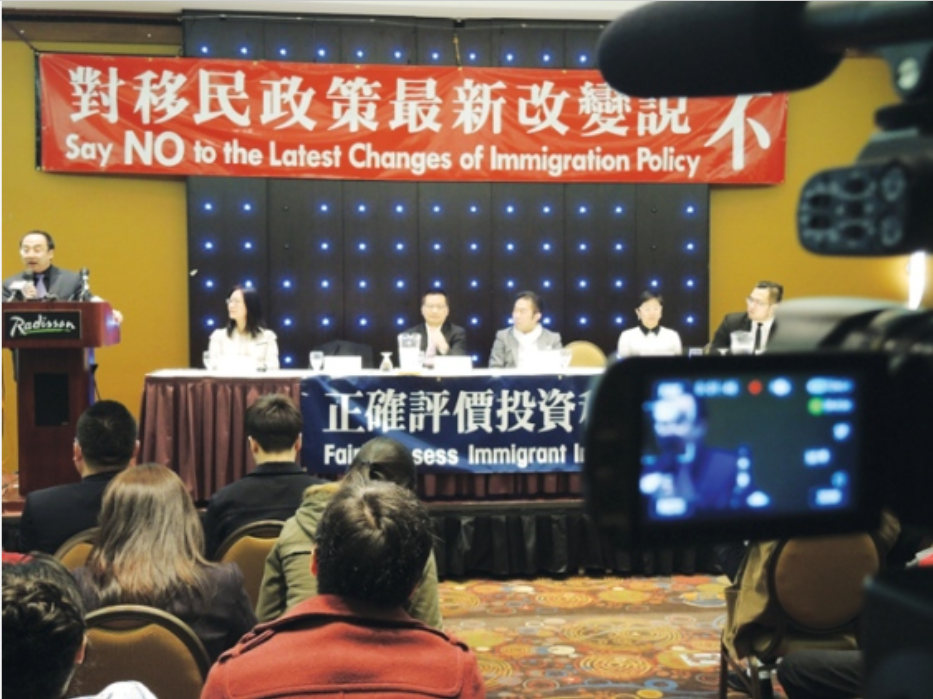 In our last post (Chinese Millionaires In Beijing Upset Canada Terminating Investor Program, Threaten to Sue) we told you about how the Federal Government of Canada, in last month's Federal budget, had cancelled the International Investor Program (IIP).

Under the scheme, would-be migrants worth a minimum of $1.6 million loaned the government $800,000 interest-free for a period of five years. The simplicity and low relative cost of the risk-free scheme made it the world's most popular wealth immigration programme.

In response 10 investor applicants  in Beijing held a news conference to plead to the Government of Canada not to dismiss the pending 45,500 applications that had been frozen in the system.

Their desire? Process those applications before terminating the program. Those investor applicants (some of whom had applied five years ago) also stated that they were discussing their options with lawyers in Canada and whether to sue for compensation for the years they had been waiting.

Well now it appears it's not just applicants in Beijing who keen to litigate.

40 Chinese community groups in the Vancouver suburb of Richmond gathered this week to also protest the cancelation of Program - and to discuss their own plans to sue the Federal Government.

According the the Richmond News:

Chinese community groups gathered in Richmond to protest the cancelation of the Investor Class Program in last month’s federal budget, and to consolidate their efforts to fight, and potentially sue, the government.

Banners with messages such as, “We love Canada. We are willing to contribute” and “Say no to the latest changes of immigration policy” provided the backdrop Wednesday for the six-person panel, which addressed the crowd about the economic implications of cancelling a program which expedites immigration for the wealthy.

Chris Ho, an immigration lawyer, who was the only speaker to address the crowd in English, pointed out the mixed messages being sent by the government in regards to investment and immigration.

“The immigration minister had announced ... that a new investor program would be coming. That was in January of 2014. In February, we have the minister of finance announce that the program is being cancelled.”

In justifying the cancellation, Minister of Immigration Chris Alexander is reported as saying, “there is also little evidence that immigrant investors as a class are maintaining ties to Canada or making a positive economic contribution to the country.

“Overall, immigrant investors report employment and investment income below Canadian averages and pay significantly lower taxes over a lifetime than other categories of economic immigrants.”

Ho argues that the minister has no evidence. “Do we have a very conclusive study or information that can point us to that? I don’t think so,” he said.

But the paying of tax isn't the only angle the group is pursuing. There is, in their words, "the issue of expectations":

“There is a doctrine called legitimate expectation. This is not new. For someone who has already filed an application, they would expect someone to deal with the application. You can’t just cancel the application without doing anything.”

The groups also speculated on the economic impact of the cancellations:

Steve Kou, a representative from the business community, gave his speech in Chinese, but later answered questions in English about the economic impact of the lost of the investor program.

“If the cancellation happens, there are no new direct investors in Canada or B.C. So if there is no more money coming to Canada, the growth rate will slow further,” said Kou.

Kou stated that the cancellation would have a huge impact on the B.C. economy, in almost all areas, starting with real estate.

“The first area would be real estate. If you cannot immigrate to Canada, why buy the properties here?”

And in an attempt to leave no racist card unplayed, the groups also threw out this beauty:

Sophia Huang, another lawyer on the panel, challenged the government’s attitude, stating that Chinese immigrants came to Canada 125 years ago as railroad builders, and paid a head-tax, which was recently apologized for, but now they are saying “please don’t come.”

“We are saying, ‘Listen, you need to communicate with us better. We would like to come here, this is our country, not only your country, it’s ours. Our Chinese ancestors built this.’”

The coalition, supported by more than 40 community organizations, is calling for supporters to vote for people who will speak for the Chinese voice. It is also threatening a possible class action lawsuit for those affected by the immigration changes.


Please read disclaimer at bottom of blog.
Posted by Whisperer at 8:48 PM