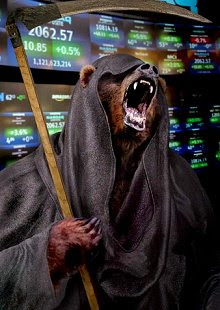 In the last post we hilighted Ozzie Jurock's take on the coming year: 2009.

Deried by Lower Mainland Bears as pollyanish, it really is not surprising. Ozzie is, after all, a salesman. And as as the past president of Royal LePage (Res.) in charge of over 7000 salespeople... Ozzie is simply unable to disasociate himself from what comes naturally; being a sales force motivator.

And while his message is as simple as it is timeless: take lemons and make lemonaide. The eternal mantra of all salesmen has taken on a very dark side these past few years.

Within the R/E Bear community there is more than just a backlash to the salesman's mantra.

There are bears... but then there are the Angry Bears.

Angry Bears are furious with what has happened within the Real Estate Community and this mantra of positism. And that anger is palpatable.

So why are some Bears so angry?

'Positism' is fine for your frontline salesman. But some Bears feel that there is certain level of the Industry... and of government and media... who have abrogated their duty and responsibility to society.

Dangerous conditions developed over the last eight years with nary of word of warning from those who should have been guarding the best interests of Vancouverites (and Canadians). It is this abrogation of responsibility that infuriates so many Angry Bears.

One of the leading Canadian Angry Bears is former Member of Parliament Garth Turner. Garth has been beating the real estate warning drum for some time on his website http://www.greaterfool.ca/

Garth notes that exactly one year ago, when the US housing market was in distress, and warning signs were popping up everywhere that serious Real Estate problems were on the horizon for Canadians, the intrepid Phil Sopher was issuing his assessment of the coming storm.

Did Sopher warn young Canadian couples across the Dominion to take heed and caution?

Did he caution them to tread carefully before committing to such a precarious financial position with an unprecedented modern storm brewing south of the 49th parallel?

As Garth notes, twelve months ago the guy in charge of the real estate mega-marketer Royal LePage issued a 2008 forecast which said:

“After experiencing an exceptional year characterized by strong average house price appreciation and record breaking unit sales, the momentum from 2007 is anticipated to carry over and position Canada’s real estate market for steady, yet moderate growth in 2008, according to the Royal LePage 2008 Market Survey Forecast released today.

“Canada’s housing market in 2008 should continue to thrive on a balanced diet of strong economic fundamentals, including high levels of employment, resilient consumer confidence, modest levels of inflation and the relatively low cost of borrowing money,” said Phil Soper, president and chief executive of Royal LePage Real Estate Services. “Canada is currently enjoying one of the longest housing market expansions in history; however, as we move into 2008 it is anticipated that slowly eroding affordability will cause demand to ease, allowing the market to move toward balanced conditions, with lower levels of price appreciation, and fewer homes trading hands.”

The Angry Bears are furious that those Canadians looking for “expert” opinion were spoon-fed 'positism' masquerading as expert, guiding advice. How many Canadians were duped by the rhetoric exhorting them to 'get into the market' before they would be left behind?

How many read reports like Phil's and then went and bought a home? How many are now trapped with zero-down, 40-year mortgages? How many became, as Garth says, "the last sucker into a market which should have been condemned"?

Garth Turner goes on to note, "Of course in the intervening months, real estate sales have collapsed by up to 70% in some cities, and prices have fallen precipitously in the country’s largest markets. Listings have ballooned, multiple offers are a memory, houses are sitting without offers month after month and the economy has deteriorated in a way that has the prime minister musing about a possible depression. Our major trading partner and the world’s biggest economy is in tatters even after trillions have been spent, interest rates are on the way to zero and Chinese leaders are freaked out about layoffs and deflation.

So, what does Phil Soper say now? That he’s sorry? That he regrets pumping the market when he was supposed to be a leader?"

The answer, of course, is no.

In this year's report Soper - like Ozzie Jurock - continues the mantra of positism and dismisses impending economic turmoil as two looming bad financial quarters, and then it’s back to eternally rising housing prices by the beginning of April.

In a nutshell this is what so infuriates so many of the Bears. They decry this abrogation of reponsibility by the Real Estate Pollyana's to safeguard the best interests of Canadians... all in the name of protecting a massive Real Estate Ponzi game.

And that's why they are so Angry.
Posted by Whisperer at 10:21 PM

Email ThisBlogThis!Share to TwitterShare to FacebookShare to Pinterest
Labels: Ozzie Jurock, Phil Soper, Why Bears are angry at the Real Estate Industry