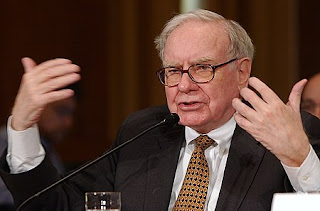 Warren Buffet, American investor, businessman, philanthropist and one of the world's most successful investors, offered these comments on the short term outlook for the economy this evening in a PBS Interview on Nightly Business Report. The interviewer was Susie Gharib.

SUSIE GHARIB, ANCHOR, NIGHTLY BUSINESS REPORT: Are we overly optimistic about what President Obama can do?

WARREN BUFFETT, CHAIRMAN, BERKSHIRE HATHAWAY: Well I think if you think that he can turn things around in a month or three months or six months and there’s going to be some magical transformation since he took office on the 20th that can’t happen and wouldn’t happen. So you don’t want to get into Superman-type expectations.

SG: But I know that during the election that you were one of his economic advisors, what were you telling him?

WB: I was telling him business was going to be awful during the election period and that we were coming up in November to a terrible economic scene which would be even worse probably when he got inaugurated. So far I’ve been either lucky or right on that.

SG: What’s the most important thing you think he needs to fix?

WB: Well the most important thing to fix right now is the economy. We have a business slowdown particularly after October 1st it was sort of on a glide path downward up til roughly October 1st and then it went into a real nosedive. In fact in September I said we were in an economic Pearl Harbor and I’ve never used that phrase before. So he really has a tough economic situation and that’s his number one job.

SG: But when you look at the economy, what do you think is the most important thing he needs to fix in the economy?

WB: Well we’ve had to get the credit system partially fixed in order for the economy to have a chance of starting to turn around. But there’s no magic bullet on this. They’re going to throw everything from the government they can in. As I said, the Treasury is going all in, the Fed and they have to and that isn’t necessarily going to produce anything dramatic in the short term at all.

SG: There is considerable debate as you know about whether President Obama is taking the right steps so we don’t get in this kind of economic mess again, where do you stand on that debate?

WB: Well I don’t think the worry right now should be about the next one, the worry should be about the present one. Let’s get this fire out and then we’ll figure out fire prevention for the future. But really the important thing to do now is to figure out how we get the American economy restarted and that’s not going to be easy and its not going to be soon, but its going to get done.

SG: But there is debate about whether there should be fiscal stimulus, whether tax cuts work or not. There is all of this academic debate among economists. What do you think? Is that the right way to go with stimulus and tax cuts?

WB: The answer is nobody knows. The economists don’t know. All you know is you throw everything at it and whether it’s more effective if you’re fighting a fire to be concentrating the water flow on this part or that part. You’re going to use every weapon you have in fighting it. And people, they do not know exactly what the effects are. Economists like to talk about it, but in the end they’ve been very, very wrong and most of them in recent years on this. We don’t know the perfect answers on it. What we do know is to stand by and do nothing is a terrible mistake or to follow Hoover-like policies would be a mistake and we don’t know how effective in the short run this will be and how quickly things will right themselves.

So there you have it. The leading authority on the economy and investing in the United States very frankly states that no one knows how to correct the financial situation and that only one thing is for certain: the end is nowhere in sight for the short term, particularly for the rest of 2009.

Send your comments via email to village_whisperer@live.ca
Posted by Whisperer at 7:02 PM