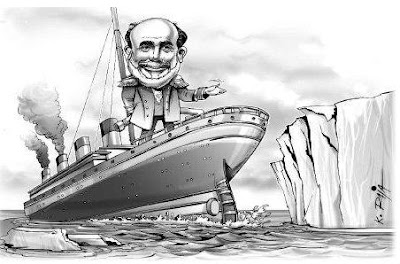 In the fervor on the Foreclosure Crisis last week, I missed this.

But so did most of the media.

Faithful readers recall that I have, on several occasions, posted about speeches from former US Federal Reserve Chairman Alan Greenspan in which Greenspan warns that the Federal Reserve will not be able to keep rates low forever and that his fear is the bond market forcing rates dramatically higher.

That warning is lost on everyone, particularly here in the Village on the Edge of the Rainforest. What prevails here is the believe that interest rates will never again rise very high.

Well, Ben Bernanke, the current chairman of the US Federal Reserve, has come out with a warning of his own.

Back on October 4th, 2010 in a presentation on fiscal sustainability at the Annual Meeting of the Rhode Island Public Expenditure Council in Providence, Rhode Island, Greenspan made some very grim comments.

The topic of the speech was the looming fiscal crisis of the Federal government. There will be no easy way to avoid it, he said. Congress has to decide what spending to cut and then it must decide which taxes to raise. Congress has been deferring this two-part decision since the Nixon Administration to avoid alienating special interest groups.

The essence of politics is buying votes with the taxpayers' money, but without losing more votes than you buy. To pull this off, there is often a fair amount of deception and the tax burden is often concealed. This concealment includes increasing deficits and increasing monetary expansion.

Here is where Bernanke is firing a warning shot across Congress's bow. Bernanke is saying the Federal Reserve will not take the hit. It will not destroy the dollar in order for Congress to play its game of deception.

Bernanke made it clear that Congress cannot maintain its present course. He said the markets will not allow this. He said that there will be a day of reckoning: rising interest rates. At some point, lenders will decide that the United States government is no longer a reliable borrower.

Like Greenspan, Bernanke has come out and said that as the US national debt grows, the escape hatch of ready lenders is going to be shut. The lenders will reduce their purchases of debt at low rates.

There are only two ways the US has of dealing with their huge debt. One of those ways (foreign lenders) is going to be eliminated by free market. The lenders will close it. They will do so out of self-interest.

That's a stunning statement and a slap in the face to all those who believe that the United States will never allow us to go back to the interest rates of the mid 1970s to early 1980s when rates ranged from 12% - 22%.

As I have constantly said on this blog: inflation and very high interest rates are coming... and they are coming long before all the 5% down, 35 year amortized half million dollar mortgages in the Lower Mainland can be significantly paid down.

Now even the Chairman of the US Federal Reserve is saying it.

Of course this was before the Foreclosure Crisis and the possible need to re-bailout the banks.

Things are starting to get mighty interesting.

Please read disclaimer at bottom of blog.
Posted by Whisperer at 8:14 AM