If at first your house doesn't sell... double the asking price! 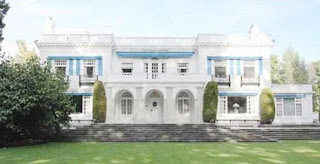 Time for another tale from the Bubble Zone.
As noted last week in the Vancouver Sun newspaper, a house has just gone on the market at 3390 The Crescent for $31.9 million.
The Crescent lies at the heart of one of Vancouver's most upscale neighbourhood's: Shaughnessy. The street itself is a  circular road with a lovely park in the middle. And 3390 is a palatial white house that sits on an acre sized lot where The Crescent meets Osler Street.

The house itself contains 10,516 sq. ft of space spread over three storeys. There are six bedrooms, eight bathrooms and five fireplaces, along with a wine cellar, a games room, a gym and staff quarters.

With a backyard pool, a koi pond, a greenhouse, and large, beautifully landscaped grounds; the home is 'palatial' in every sense of the word. 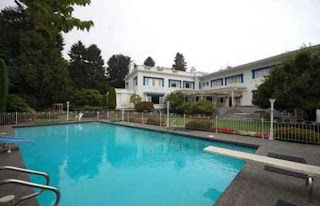 But what makes this mansion stand out is it's selling history. The current owners bought the home in April 2004 for $6 million.
Last year the home was listed for sale for $17.9 million, but there were no takers at that 'bargain' price.
And we say 'bargain' price because after looking at the high prices mansions are commanding in Shaughnessy (a house that sold last year on Angus Drive for $5.7 million was recently assessed at $9 million), the owners decided to raise the asking price from $17.9 million to $31.9 million.
That's right... the home failed to sell so they doubled the asking price.

Please read disclaimer at bottom of blog.
Posted by Whisperer at 2:13 AM