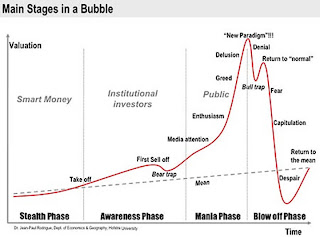 If you have followed the topic of real estate bubbles, you have seen the above graph (click image to enlarge).

Titled 'The Main Stages of a Bubble', it is a representation of the stages that all bubbles (real estate or otherwise) travel through.
As we watch our Real Estate bubble in Vancouver, one has to wonder if we are now approaching the end of the third stage of the bubble process; the Mania Stage.
The Mania Stage has four basic phases: Enthusiasm, Greed, Delusion and New Paradigm.
Many real estate bears, salivating in 2008/2009 that the bubble might have been bursting, thought we had seen the end of the Mania Phase.
But watching events over the past 18 months, many will surely say the current market qualifies as delusion bordering on a new paradigm.
Have we indeed made that transformation?

See? There never was a bubble. Our market has achieved a New Paradigm.
Perhaps this explains why, in the current mania, we see the asking price of this Shaughnessy Mansion almost double from $17 million to $31 million.
Or why we see this downtown Penthouse condominium, which sold last year for $18.1 million recently relisted for a stunning $28.8 million (click on image below to enlarge MLS screenshot of listing). 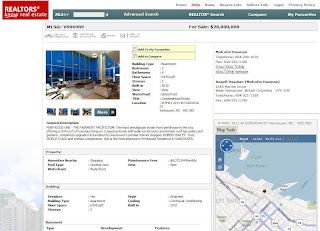 The chutzpah for these types of increases is emboldened by the belief we have achieved that 'New Paradigm'. And the new paradigm viewpoint has been further reinforced with the proliferation of articles, like this one, explaining why the influx of Chinese money won't dissipate.

For those who study Bubbles, it has always been difficult to truly appreciate how pervasive and engulfing the Mania Phase can be.

People still look back at Holland's tulip mania in the 1600's with a sense of bewilderment. Long considered the first recorded speculative bubble, the peak of tulip mania saw single tulip bulbs selling for more than 10 times the annual income of a skilled craftsman.

Peering back across the gossamer waves of time, it's often difficult to comprehend how the enthusiasm for tulip bulbs could beget the all-consuming greed that leads to the delusional prices which then entrap a nation into believing that somehow a new paradigm could be created in the price of tulips.

By the time our current situation bursts, residents of the Village on the Edge of the Rainforest will be experts on just how a inexplicable Mania can completely grip a populace.

Please read disclaimer at bottom of blog."
Posted by Whisperer at 7:08 PM