New home sales on the West side of Vancouver 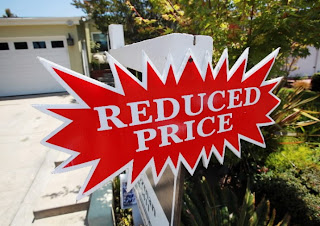 For the past few years we have been told that the west side of the City of Vancouver has been HAM central (Hot Asian Money) and that the influx of money from China will not only keep driving prices skyward...  but will more than support/sustain values which bears may 'claim' are out of whack with local fundamentals.
Bear blogs have noted that the influx of money into many Real Estate markets (Australia/Canada) is driven by the fact that China has pumped more stimulus into their economy per capita than have the Americans into theirs.  A lot of this money is flowing out of China and into investments like Vancouver Real Estate.
The mistake many make is to believe this money will be unending.
As we have documented on this blog, China is trying to engineer a downturn in it's very bubblicious real estate market. The spillover effect has lead to what many believe is a popping of the housing bubble in Australia. As real estate values collapse in China, as credit is reduced in China... there is less money available to funnel out of the country and into Aussie real estate.
Many have suggested (to outright ridicule) that this pattern will begin to surface here in Vancouver as well.
Since many Asians look to buy new houses when they invest their HAM money here, it is new home sales that are watched with keen interest in markets such as the west side of Vancouver.
And it is just such an analysis that VREAA focuses on in a post today.
Noting that sales of brand new homes has dropped dramatically on the west side of Vancouver, VREAA (courtesy of contributor ZRH2YVR) observes that there are currently 17 months of inventory of new builds on the market compared with a 7.5 average for the whole market.
Even more intriguing is what happens when you break up all properties for sale by price.
There is a very strong drop off in sales above the $2.8 million level.
For properties under that level, months of inventory is sitting at about 4 months. But above that value, it immediately jumps over 10 months of inventory and reaches 24 months at the 4 million level.
For your humble scribe this is of great interest for I know personally of someone who is involved in housing speculation exclusively on the west side of Vancouver.
The modus operandi has been to buy a west side tear down for about $1.2 - $1.8 million, spend $850,000 constructing a higher end new home, and then selling that home for approximately $4 million.
His last endeavour was his most successful and emboldened by past success (he works in partnership with three others), his group had visions of purchasing at least 3 properties this year to replicate their efforts. They have been very optimistic about how well the properties they plan on purchasing will do because the timeline will see them coming on the market in early 2013 which will coincide with the removal of the HST.
Naturally we have had numerous debates about where the market is going and the wisdom of this strategy.
As west side new home high end inventory balloons to 24 months of inventory at the $4 million level, what will the impact be on his interests.
He has already purchased at least one tear down property that I am aware of.
With over 450 west side homes for sale over $2.8 million and negligible sales, this is (as VREAA notes) a "crazy amount".
What impact is this going to have on his group (and other speculators doing the same thing)?
With capital tied up in these projects (much of it borrowed money), new tear down's (under the $2.4 million mark) cannot be purchased.
As months of inventory grows in the under - $2.4 million category and as inventory fails to move in the over - $2.4 million category, how long before the pressures of the market start to have their impact?
How long before other speculators have to bail and sell 'below market value' to minimize losses being accused on interest payments on the borrowed money?
And what of those boomers, for whom retirement is based on capitalizing on housing bubble prices, start bailing at 20% or 30% below current market value just to ensure they 'get what they can' from a collapsing market?
We will watch sales (and actual prices achieved on those sales) with keen interest.
I can't help recall how we saw similar scenario's play out in the early 1980's.
Of course... it's different this time, right?
==================

Please read disclaimer at bottom of blog.
Posted by Whisperer at 8:06 AM