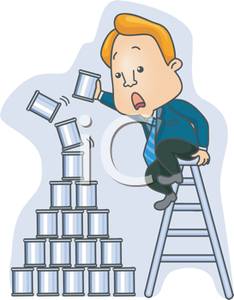 Interesting little development in the world of high finance today.
Bloomberg has announced that an unnamed Canadian bank has filed suit against at least seven firms including JP Morgan over conspiracy to manipulate the price of interest rate swap derivatives for more than three years.
The lawsuit is contains a trove of documents that are shedding light on the manipulations going on. The issue is significant because Interest rate swaps artificially support the bond market by creating massive demand for bond trades that are embedded into these swaps.
From Bloomberg:

JPMorgan Chase, Deutsche Bank AG (DBK) and HSBC Holdings Plc (HSBA) are among at least seven firms accused by another bank of participating in a conspiracy to manipulate the price of derivatives worldwide for more than three years.
The unnamed bank, seeking immunity, told Canada’s Competition Bureau that traders and cash brokers conspired to influence the Yen London interbank offered rate from 2007 to 2010 to profit on interest-rate derivative positions linked to the benchmark. The bureau spelled out the probe in documents it filed with the Ontario Superior Court in May.
The documents, shown yesterday to Bloomberg News by court clerks, offer one of the most detailed accounts yet as watchdogs in Europe, Asia and the U.S. look into concerns that firms conspired to manipulate interest rates serving as benchmarks for trillions of dollars of financial products. Canada also is investigating Citigroup Inc. (C), Royal Bank of Scotland Group Plc (RBS), ICAP Plc (IAP) and RP Martin Holdings Ltd., the court documents show.

It is important you understand the volume and value in this market.
Current figures aren't available but as of 2007, JP Morgan held $61.53 trillion in total OTC swap derivatives. BOA held $23 Trillion, Citibank $19.9 Trillion, HSBC $2.1 Trillion and Wachovia held $3.1 Trillion in OTC swaps, which are probably now on Wells Fargo's books. Combined, the top 5 US banks held $110 Trillion in OTC swaps as of 2007.
These figures has likely increased significantly in size over the past 5 years as the financial system teeters on the verge of collapse.
Compare this $110 Trillion with the next next top 20 banks (they held a mere $1 Trillion in OTC swaps combined!)
Of this total $111 Trillion, an astonishing 65% of these books are Interest Rate (IR) Swaps.
This massive trading of OTC Interest rate swap derivatives creates massive artificial demand (no end user is purchasing the bond...this is merely trading for trading's sake), which results in an artificially high price for said bonds. This suppresses interest rates and keeps them at severely and artificially low levels.
As the blog Silver Doctors outlines, this is how you can see 3.5% 30 year rates when actual inflation is running 8-10% annually. Massive artificial demand is created for bonds due to an unimaginable volume of Interest rate swaps tradei back and forth among the US Treasury's proxies of JPM, Citi, HSBC, etc.
JPMorgan's interest rate swap book alone requires $41.4 BILLION in bond purchases PER DAY in order to properly hedge the growth in these swap books, plus an additional $30.3 BILLION in bond purchases PER DAY to hedge maturing interest rate swaps that need to be rolled-over and replaced. All just to keep a static book.
It has been documented that just during Q4 of 2007, JPMorgan alone required $71 Billion worth of bonds daily just to hedge its interest rate swap book.
According to the US Treasury, during Q3 of 2007 the Treasury required a total of $105 Billion in debt borrowings. Assuming the treasury sold 100% of its Q3 2007 offerings to JPMorgan, $105 Billion would satisfy about a day and a half of hedging requirements for JPM's swap book. Clearly it is physically impossible for JPM to be hedging this type of volume and is one of the reasons critics say it is clear that JP Morgan is actually an arm of the US Federal Reserve.
Critics also say that this is why gold and silver are so stridently suppressed, as they would otherwise blow the whistle on this whole ponzi game of finance.
It is also why the developments in Europe with Greece, Portugal, et al is so important.  If default takes place, not only would there be a serious mainstream move into gold and silver (and the metals would significantly rise to their unmanipulated, free-market values) but at this point JPM's OTC derivatives would kick in JP Morgan would have to pay out on their $61.53 Trillion derivative position.
This would without question take down the entire financial system.
==================

Please read disclaimer at bottom of blog.
Posted by Whisperer at 9:10 AM