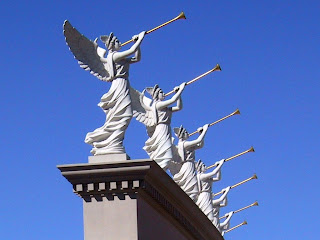 Our friends over at VREAA picked up on an article which is simply too good not to share with those faithful readers of this blog who may not visit that site.
For years I have ruminated with a couple of colleagues how, years from now, we will look back in amazement at how Canadians could watch the housing bubble implode in America, repeat the exact same mistakes as Americans, and then watch our country experience a similar collapse (albeit with a distinct Canadian bend to the story).
And while the collapse has not happened here yet, Americans are watching dumbfounded that we could so wilfully move forward into the same trap they fell into.

One of the best articles capturing this sentiment has been published in a magazine put out by - of all places - the Philadelphia Church of God.
In the latest issue of "The Trumpet", a magazine the religious group publishes 10 times a year, an article headlines 'Canada's Housing Bubble is Stretched to the Limit'. And it's a great synopsis of the Canadian situation.
The magazine starts off by zeroing on the key metric that demonstrates our real estate market is way, way out of balance.  Noting that Canadian incomes have not been growing during the inflating of our housing bubble they say:


(Canadian) house prices have inflated virtually non-stop for more than a decade (but there has been no) income growth. Consequently, it is virtually impossible for the typical person to purchase a home without bankrupting himself in the process. For many families, even with two incomes, buying a house is stretching beyond the breaking point...
Before the massive run-up in house prices in 1999, the price of a home was 3.2 times the average person’s salary. It averaged that for decades. By 2010, the average house in Canada cost 5.9 times the average yearly salary, according to the Globe and Mail.

The article then outlines the average Canadian worker's income and costs out how much is being eaten up trying to service a mortgage and observes:


Talk about being a slave to your house. The average Canadian is forced to spend almost 100 percent of their income just on “ownership” costs! How do people feed themselves?Of course that is why single-income families rarely buy houses in Canada anymore. To buy a house, both spouses need to work. One full salary goes toward paying for the house. The other salary goes toward feeding the family, paying for vehicles, paying other debt, and life.

The next comment struck a chord with me and is bang on in it's assessment. It is what this, and virtually every single bear blog, has been saying:

Canadians rarely seem to consider the fact that their biggest investment might (read: will probably) go down in value. Falling house prices is an idea that many Canadians laugh at. Americans laughed too before America’s bubble burst. Now, many Americans are locked into paying mortgages on houses that are becoming worth less and less each year.
Does this sound like the basis for a healthy economy? Indentured servitude for three decades just to see every dollar, dime and penny earned go toward paying for a depreciating asset! If you buy a house today, or if you bought a house over the past five to ten years, that is what you are risking.
If Canadians do default on their mortgages, banks can not only take the house, but have full recourse to go after all their other assets and income.
Yet Canadians seem more than willing to take the risk. Why? The same reason Americans did. When house prices are going up, it makes everyone rich! A 5 percent yearly gain on $300,000 is a cool $15,000—money that can be tapped through equity lines of credit.

Next they zero in on the cause - low interest rates:

Offering interest rates yielding only fractions of a percent, the Bank of Canada is practically driving people into real estate.
And how effective has this been to drive people into real estate?
In Vancouver, so many people are buying houses, second houses and investment houses, that the ratio of home prices to incomes is the highest in the English-speaking world, according to consultancy firm Demographia. The survey labeled it the second-least affordable city in the world! An average house there costs over 10.6 times the average pre-tax income.
In Toronto, the real-estate bubble is so out of hand that the city has 173 skyscrapers under construction. New York, which boasts a population almost four times larger, is only building 96.
Since America’s housing bubble popped in 2007, Canada’s house prices have risen an astounding 22 percent. That has to be the definition of insanity—piling into the very investment that made your neighbor and most important economic partner virtually collapse.
But perhaps the biggest sign of a Canadian housing bubble is debt! Rising debt is the gas that fuels all bubbles. The average debt burden of Canadian families stands at a remarkable 153 percent of disposable income—and growing. It was only 150 percent three months ago. Canadians are now one of the most indebted people in the developed world, and just about as indebted as Americans before their bubble burst.
Based on this measure, the Economist figures the Canadian market is overvalued by over 70 percent. Even U.S. bubble epicenter Los Vegas has only seen house prices fall by 60 percent.
Last month, Merrill Lynch called Canada’s housing market overvalued, oversupplied and driven by speculation.
And in a report released last week, CIBC argued that the people least likely to be able to afford new mortgages are the ones taking on new debt. One third of debtors hold about 75 percent of all personal debt. And who is this one third? According to cibc, it is boomers nearing retirement and those already burdened by high debt.

The Trumpet, as it is with most Americans who take the time to look northward, shake their heads and conclude what bloggers in Canada have been saying for the last few years:

Canada’s bubble is getting close to bursting, and when it does, expect a massive economic implosion. Unemployment will soar, banks will fail or ask for bailouts, and the dollar will plunge in value. Millions of Canadians will be left paying a fixed mortgage on a rapidly depreciating asset that will destroy their financial lives. Five years following the popping of America’s housing bubble, Canadians may be about to wish they had learned a lesson. Get your ear plugs ready.

It truly is sad the everyone outside of Canada can see all of this so clearly, yet we remain purposely blind to our predicament.
==================

Please read disclaimer at bottom of blog.
Posted by Whisperer at 11:40 AM