The Noose tightens... Whistler is down 50% 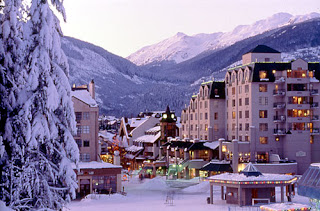 It's fascinating when you talk to people about real estate in Vancouver. No one can conceive of a 25% drop in prices, let alone 50% or greater.
If you are one of them, faithful reader, take a moment and cast your eye up the Sea-to-Sky highway to Whistler.
You remember Whistler.

Co-host site of the 2010 Olympic Games, best ski mountain in North America. Was it only 6 years ago the real estate furvor started taking off there?
Sites like Whistler real estate online.com hailed the 'can't-miss' money making opportunities that abounded.

Here's a screen shot of that site for the archives incase it disappears (click on image to enlarge): 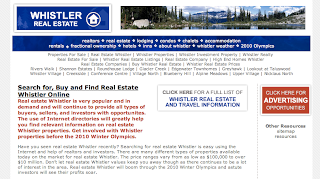 So let's check in on Whistler. How are those "astute investors" making out with those "soaring profits"?
Not so good apparently.
Headlines in the local news on March 1st tell us real estate is crashing hard: 'Hotel condominium units hit hard by current economy - Some units selling for half of original value.'

Condos selling at 50% of their original value? Say it isn't so.

Quoting from the article:

Those who own a condo unit in a Whistler hotel are sitting on great potential, but at the moment the units are not showing great value.
Real estate consultant Denise Brown with Re/Max Sea to Sky Real Estate reported that a unit that originally sold in the Four Seasons Whistler for about $1.1 million was recently resold for only $520,000.
"We've seen the prices come down significantly," she said.

The article is a great read for those interested in what happens to speculative dreams that turn to a nightmare.
We hear from Pat Kelly, of the Whistler Real Estate Company, who tells us that when condo hotel units first became available in Whistler expectations were high.

"The economic climate in Whistler and around the world was much different and the number of destination visitors to Whistler was larger. People were buying on vision. Revenue has not met expectations in the last few years."

According to Kelly, the lower than expected revenues produced through hotel condo units have combined with exchange rates, high strata fees, high property taxes and fixed overhead costs to drive prices down.
That last sentence of Kelly's summarizes the whole speculative mania:

"People were buying on vision. Revenue has not met expectations in the last few years."

Meanwhile RE/Max's Denise Brown observed that the people who were relying on the hotel condo units to produce high returns beyond covering all the costs associated with owning this type of property are getting out of their investments. And they're clearly willing to take a 50% loss to get out of those investments now before it gets worse. There simply aren't the buyers today who are willing to make the same mistakes those earlier 'astute' investors made.
Said Kelly:

"People aren't willing to spend as much in Whistler as they were a decade ago. It's not anything wrong with Whistler or that Whistler is worth less. It is just that people are prepared to spend less."

The collapse we are seeing on Vancouver Island and in the Okanagan has now crept to within a mere 90 minute drive up the Sea-to-Sky highway from Vancouver.
How much longer until we start to see these same comments about real estate here?
==================