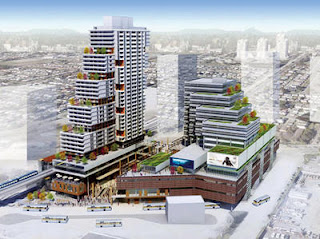 Last Saturday I posted aboutt the tsunami of condo pre-sales that are due to come onto the Greater Vancouver Real Estate market in the coming months.

Ozzie Jurock made reference to it on his Face Book page and described the spring/summer condo market as:

The battle for condo market sales is about to become very intense. And with 8,000 pre-sales coming on the market, a battle within a battle is sure to emerge.

Clearly the first shot was fired by condo king Bob Rennie with the launch of Marine Gateway last Saturday.

In the months ahead, he will be expanding on this theme as he goes to market with 3 more developments along the rapid transit system:

The transportation theme is going to be part of a major marketing strategy weaved among a number of initiatives which attempt to put Rennie's clients at the forefront of the coming tsunami wave of product.

It's going to be a very,very tough market.

Compounding the challenge is all the negativity that has been prominent in the mainstream press recently.


And all this has contributed to several months of rapidly declining real estate sales.  Let's face it, who wants to catch a falling knife?  Especially when everyone seems to be saying that very sharp knife is going to fall.

That's why we cast a suspicious eye on the sell out of Marine Gateway in four hours on Saturday.

Witness who were there have commented on other blogs that there were only about 110-130 people lined up for pre-sales (Global TV covered the sale saying it was less than 150). Yet all 415 units sold out?

Given the shenanigans we have seen from the real estate industry over the past year, things like:
... it makes you wonder about the legitimacy of the supposed 'sell out' of pre-sale contracts at Marine Gateway.

Not to suggest there's anything illegal happening here.  No doubt all the units are contractually spoken for.

But how many went to realtors whom had inside connections and how many were sold to actual buyers/speculators? How many units were going to go unsold on Saturday but were suddenly "spoken" for?

Perhaps those 415 presales (options to purchase) weren't all actually available for sale.

It's my understanding that most lenders will ask that 40 to 60% of the condominiums in a development have an option to purchase before the bank will fund the project. I am told it is common practice to strike a deal with realtors that, if they want to be an exclusive agent to sell in the complex, they have to pick up 5 to 10% of those options each. Once the complex is finished and all the developers suites are sold, then you can sell yours. It means that these  exclusive agents could buy half of the pre-sales at an offering themselves.

In this way if 130 people show up to buy, you could have a sell out because half of the pre-sales are sold to the exclusive agents. It's a sell out, but it's just pure theatre.

The stakes here were simply too high for anything but a sell out.

The huge marketing effect to be leveraged on the Rennie developments coming up later this year that would be bolstered by a record breaking sellout at Marine Gateway cannot be underestimated.

There hasn't been a sell-out of pre-sale condo unit offerings in Vancouver in over six years. You have to go back to the Woodward's presale in 2006 - before the collapse of the world financial markets - to match an opening day pre-sale sellout of a condo development.

With a 'the sell-out is back' tagline, what an opportunity to market the next three projects.

Marine Gateway can be held up to potential buyers of the next three rapid transit line projects and they can be told 'buy now before you are priced out forever'.

When you consider this, how many of you out there (if you have your own real estate development company) wouldn't snap up all 415 pre-sale contracts (and sell them over the next 3 years as Marine Gateway is constructed) as a spring board to launch 3 other developments in this type of intense competitive market?

Personally I think the events at Marine Gateway were just that... pure theatre.

Either way, one thing is certain.

Those speculators (and exclusive realtor agents) who snapped up these units will either profit immensely or founder badly on this effort. A huge gamble is being taken here.

As Ozzie Jurock noted on the weekend in the Vancouver Sun,


"many made a lot of money by 'flipping' pre-sale contracts in the past, but the rules and risks are much different now."

Ozzie's right.  The rules and risks have indeed changed. And if the restrictive mortgage regulations proposed by the OSFI are implimented, the game will change even more dramatically.

If that happens Marine Gateway could well become the Lower Mainland's speculative Waterloo.

Please read disclaimer at bottom of blog.
Posted by Whisperer at 12:31 PM