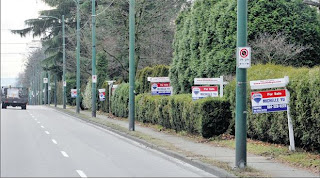 For those who follow Vancouver Real Estate, you may recall back in the third week of January there was great media speculation that there would be an influx of Asian buyers to the Lower Mainland for Chinese New Year.
The Vancouver Province headlined on January 19th: Chinese cash buyers may be about to spice up choice neighbourhood real estate market and for sale signs sprouted everywhere on the West Side like those in the picture of Granville Street above.

Julia Lau believes sales are about to spike in certain neighbourhoods, in conjunction with the three-week holiday associated with Chinese New Year. Lau’s clients are wealthy Chinese businessmen who set their families up in tony areas of Vancouver and West Vancouver that offer multi-million dollar homes with top schools. These investors like to buy Vancouver property while visiting the wife and children at this time of year, Lau says. “In Chinese culture we buy one home for living in and a few for investments,” Lau said. “Most of my clients buy in cash, so they don’t need the bank. They would not be forced to sell (due to changing financing conditions.)” Lau predicts that in the Chinese investor season from January to May this year, she will sell ten luxury homes per month — a little slower than last year’s frenetic sales pace.

Hyped up by these expectations, Vancouver homeowners rushed to the market with a surge of real estate listings in the first two months of 2012.
But sales fizzed and the boom seems to have busted before it could even get started.
High end HAM target homes on the westside of Vancouver (over $2.5 million) stalled as months-of-inventory have ballooned to over 10 months of stock.
What gives?
Could it be that Lau's clients, who "buy in cash, so they don’t need the bank", might be having liquidity problems?
CNBC is out with a story reporting that 'China's Home Prices Have Fallen for the Fourth Consecutive Month'
Compounding the problem is the fact that the strident clampdown on the housing bubble is sending the Chinese stock market plunging as Bloomberg noted yesterday.
Thus the expected influx of wealthy Chinese - those investors whom Lau said "like to buy Vancouver property while visiting the wife and children at this time of year," - suddenly find themselves 'cash poor' as the imploding markets at home take hold.
Surprise, surprise... suddenly there's no money to splurge on Vancouver Real Estate.
But as the market on the West Side of Vancouver stagnates on the sale of properties valued in the over-$2.5 million category, it's a different story entirely in the under-$2.5 million category.

Local Speculators have been snapping up properties like hot cakes with dreams of capitalizing on what has been a redevelopment cash cow the past few years. Massive profits have been made as HAM snapped up redeveloped West Side homes at ridiculous prices.
But is the tide starting to turn? As the over-$2.5 million market grinds to a halt, are there strains developing in the ranks of the speculators?
Ads are now appearing on Craigslist from developers attempting to bail on properties they are in the middle of renovating.

Here is one such property at Blenheim and W. 23rd 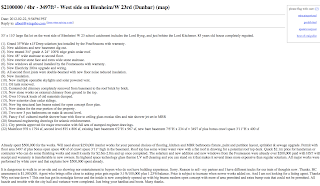 The speckers outline what they have done to the property so far:

Already spent $500,000 for the works. Will need about $250,000 interior works for your personal choices of flooring, kitchen and MBR bathrooms fixture, paint and partition layout, sprinkler & sewage upgrade. Permit with floor area 3497 sf plus bonus open space 400 sf of crawl space 3'11" high in the basement. Roof top has some winter water view with a flat roof in drawing for a potential roof top deck.

And the incentive is laid out for you to take this off their hands:

Quick $2.1m price for handyman or contractor who can do some finishing works and resell it easily for $2.6m-2.8m and up once completed.

So why are they selling?

Reason to sell - my partner and I have different tracks for our train of thoughts now.

'Different tracks for our train of thoughts'?

Sounds to me like the prospect of an imploding Vancouver housing bubble is starting to spook these speckers.
Is this the start of a trend? It will be interesting to see how the under-$2.5 million market on the West Side of Vancouver evolves if the evaporating HAM situation fails to reverse.

On that note, the situation in China is being driven by deliberate tightening by the government as officials implement an array of measures to curb growth in the real estate sector.


"If China does not control property bubble, once it bursts, the country cannot withstand. I truly hope tightening will continue."

The speculation game on Vancouver's West Side is about to get very rocky.