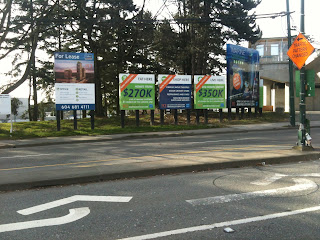 Let me ask you... what's wrong with the picture above?
Click on it to enlarge and take a look at it for a minute.
The picture was taken this morning and captures the corner of Cambie and Marine in Vancouver - site of this week's hottest Real Estate topic; the four hour sell-out of the development known as Marine Gateway.
In case you aren't aware of what went on, Global TV provides this synopsis:
Marine Gateway, and the 415 pre-sale units that sold, is big news because at a time when listings are soaring and sales have been falling off a cliff, the pre-sales at this development have bucked the negative trend.
In fact it has completely turned that trend on it's head.
Hmmm.
Let's put that into perspective.

A sell-out of pre-sale condo unit offerings hasn't happened in Vancouver in over six years.  As Global TV noted in this story, you have to go back to the Woodward's presale in 2006 - before the collapse of the world financial markets - to match an opening day pre-sale sellout of a condo development.

And Marine Gateway sold out even faster than that Woodward's development.
Woodwards (with similar prices) took 12 hours to sell 536 units.
At Marine Gateway people started lining up last Thursday. And as the lineups began, news spread that over 11,000 people had pre-registered for this development.
But by Saturday morning only about 100 - 150 people had actually lined up (one commenter over at Vancouver Condo Info pegged the number at only 106).

So 106 people bought over 400 units?
Hmmm.
Interestingly when you watch the Global clip, one buyer laments she was only able to secure a 1 bedroom condo (without an available parking spot at that). How come? Did she come late and miss out?
No... she stresses she showed up on time.
Even more curious is the fact that Global didn't find anyone to talk to that walked away empty handed.

Hmmm.
One can't help but observe that this was a very carefully planned and prepared offering.  As the Global story notes, Rennie Marketing Systems had a lot at stake here.
Checking craigslist in the week before the offering, the infamous Condo King wasn't leaving much to chance.  There was clearly significant marketing and networking done prior to the sale.
As you can see by these ads (click to enlarge), other realtors were already on board offering the units to customers in advance of the Saturday opening. They were even offering to rebate 20% of their commission to get you on board early: 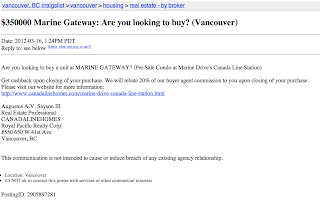 Instead we were witness to  THE MOST SUCCESSFUL pre-sale launch in Vancouver history, a perfect event for what is touted as the cutting edge model of what's crucial to real estate sales in the modern city.
All accomplished in the midst of a market which has been screaming negativity week after week from the likes of the mainstream press with their talk of a housing bubble ready to burst.

Amidst negative statements on debt and the real estate bubble from the Governor of the Bank of Canada and similar statements from the Federal Finance Minster.

Amidst warnings from the heads of some of the nation's biggest banks on the threat of a bursting housing bubble.

And all framed by several months of negativity of actual sales results released over the past few months.
Hmmm.
I can't help but think of all the shenanigans we have seen over the last few years.
I think they call it 'staging'.
You know what I'm referring to.... development marketers hiring people to stand in line, creating a 'buzz' for a pre-sale. Staged helicopter tours supposedly flying wealthy Asian buyers around proposed new developments. Realtors bringing in 'surprise' competing parties just before a couple is about to make an offer on a house (thereby pressuring you to act right away).
All done in the name of 'staging' the right 'optics'.

So what are the optics created by Marine Gateway?
Would it be wrong to cast such a suspicious eye on a record breaking sellout anomaly that occurs at time when other realtors are openly talking about how dead the market has been so far this year? When only 1% of the registered people interested in the development actually show up on sales day?
Hmmm.
Which brings us back to the picture at the top of this post.
As I said, it was taken this morning... a full five days after what has been a supposed record breaking pre-sale sellout in a dead market wherein only about 106 people lined up and created a 415 unit sellout of a development which will be a springboard for a host of new developments with a "transportation, transportation, transportation" theme.
That picture is conspicuous for what is NOT there.
Let me ask you... when was the last time you saw a developer sell out an offering and not promote the crap out of that success with "SOLD OUT" banners plastered across every conceivable sign posted on the property?
It's been five days and there is nary a single 'sold out' sticker anywhere.

I could understand the day of, or maybe even no stickers until after the weekend was over... but nothing a full five days afterward?

Especially when this is the first of several developments being launched along the transportation network by the same promoter this year.
Perhaps they're waiting until after Cam Good's helicopter makes a fly by?

Please read disclaimer at bottom of blog.
Posted by Whisperer at 9:49 PM