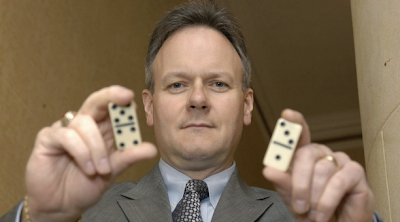 A portion of an interview between Bloomberg News and Bank of Canada Governor Stephen Poloz on December 18th, 2013.

Right from the first question about the housing bubble you have to raise your eyebrows as the reporter begins with the premise that Canada is "immune" to a bubble. The hubris is palpable:

A: “First of all, puffing up the household sector, and therefore housing and cars and stuff, that was exactly one of the consequences of the easy monetary policy.”

“When you had exports actually caved in, and the only way to fill that in was to cut rates and see who would do the spending. The household sector did the spending, they did the borrowing. So they did the heavy lifting and that made a milder recession. So usually, a year or two later, you’re done. You don’t get the accumulated side effects. Here, we’re going into our fifth year and the accumulated side effects are starting to get bigger, and that is, gradually, more and more house-buying and indebtedness, and the risk that prices have gone above their fundamentals somehow. I won’t get into a debate about how much that might be, because there’s a lot of different methods to do that. It’s a very hard thing to do.”

“But the important point is that that’s a natural consequence; we were aware of it all along. And secondly, that it went very gradually. A bubble usually doesn’t look like that. If you look at those charts that people look at, the level sounds like a big number. However, it’s been going up gradually for six years in a row. Usually, when you have a bubble, it looks like the left-hand side of an Eiffel Tower. It goes up really fast, and then you can predict, well, that bubble’s going to break, you’re going to get the right-hand side of the Eiffel Tower. If you go back to 1986, 87, 88, 89, that’s what you saw. So there’s a big difference in level versus the dynamic, I think.”


“So can this thing have a soft landing? Yeah, all it has to do is gradually wind down in the opposite way through judicious monetary policy and continued growth and the fundamentals keep improving.”


Q: Are you talking about house prices or debt levels?


A: “All of those things. Those are the things we look at to ask are the household imbalances becoming too extreme. The house-price chart, relative to rent or relative to income, they’ve just gone up very, very gradually over the last six years. So soft landing is your best bet from that kind of situation. That’s historically the way it looks.”

Q: But the debt-income level is still rising. Doesn’t it need to decline at some point?

A: “Or flatten, would be the more likely scenario. And that could come from increased growth in the economy and therefore incomes. It’s probably the most likely way it would come. It doesn’t need the numerator to do the correcting.”


“We have significant slowing in both the regular credit and overall housing spending until we got late in the summer and people took advantage of low rates and said we better get in there. We believe that’s a pulling-forward, takes two or three months for us to make sure that’s true. The question you raise is a perfectly valid one, but we don’t have enough data today to make a judgment. We just won’t extrapolate it. We look to our structure, and talk to people, and what are banks seeing, etc., and we’re pretty comfortable with our soft-landing belief.”

Q: Will you be the Governor responsible for the longest pause in interest rates since the 1940s?

A: “We had never seen conditions like we faced in 2008-09. We had never seen that before. The bubble-crater story, the closest thing we’ve got to compare is the 1930s. And I’ll argue that policy making was far smarter this time around than they were in the 1930s. Good for all of us. Coordinated, other countries doing it, everybody’s doing it. And so that buffered the downside, and it could have been much worse. People lose sight of that every day. It’s been enough years that people think, why haven’t you done something more? Well, we still have that pull from that crater underneath us. We point to those things where natural growth so far has failed us. Growth is all-induced growth. That’s policy doing that for us. Let’s not forget that. As we see those animal spirits becoming more normalized, then we’ll be able to withdraw that and we’ll be happy again.”

“I can’t make a statement around what you said. It’ll take whatever it takes. We’re not going to do something silly here just because it’s been a long time. We’ve got a job to do. We’re going to do what we can to make sure that inflation gets back to normal, the economy gets back to normal, and young folks get their first jobs, whatever. There are soft spots in the economy, even though we’ve had a better experience than many other countries, it’s not ideal.”

All it (the non-existent bubble) has to do is gradually wind down in the opposite way through judicious monetary policy and continued growth and the fundamentals keep improving.


Please read disclaimer at bottom of blog.
Posted by Whisperer at 11:30 PM