Tues Post #2: 'We ain't got no stinkin housing bubble'

As Vancouver's average price hits a new record high and the International Monetary Fund casts it's eyes on Canada (declaring our's the most over-valued real estate in the world), is this cause for concern?

Not according to our new Bank of Canada Governor.

"Canada’s housing market is not in a bubble and not likely to suffer a sudden and sharp correction in prices..."

The central banker was testifying before the Senate banking committee on his latest economic outlook and used the testimony to pointedly disagree with a couple of forecasting organizations that weighed in this week on the Canadian situation — the Fitch Rating service that judged Canada’s housing market as 21% overpriced, and an OECD recommendation that he start raising interest rates in a year’s time. 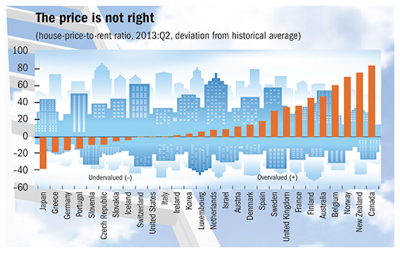 The Fitch Ratings report concluded that in Canada "… a high level of employment and individual net worth tied to the value of the housing stock, a housing downturn could have serious consequences for the overall economy.”

He believes the most likely scenario is a soft landing where home prices stabilize. although he acknowledged that an imbalance in the market and high household debt remain key risks.

“Our judgment is (the housing market) is a situation that is improving, this is not a bubble that exists here that would have to be corrected."

Gotta love someone who oozes confidence.

There wouldn't happen to be a 'caveat' in that analysis, would there?

“If there is a disturbance from outside our country that’s another analysis.”

Ahhh… good thing those economic crisis's never originate from outside our borders. So basically, everything's stable until it isn't?


Please read disclaimer at bottom of blog.
Posted by Whisperer at 8:00 AM