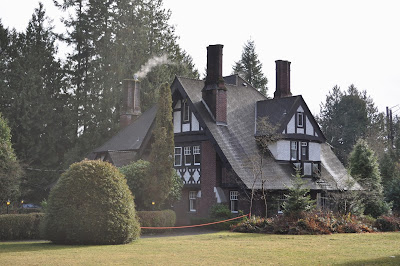 Last week we told you that WilMar mansion, after several years of languishing on the real estate market, had finally sold.

A renovation and redevelopment plan which was to include the construction of five new homes on the extensive property (while seeing the historic Tudor structure preserved) was tabled and it allowed a sale to be brokered.

Or at least, that was the plan.

Tonight we learn that the proposal to rehabilitate the grand old Tudor mansion at 2050 Southwest Marine Dr. and add infill through a heritage revitalization agreement with the City of Vancouver has fallen through. From the Vancouver Courier:

Developer Norm Porter of Beech Developments was behind the proposal to restore the property. He was working on the project with developer James Evans and architect Timothy Ankenman of Ankenman Marchand Architects.

The deal to buy the property was contingent on an agreement with the city and other matters, but Porter is going through with the purchase to try to recoup money that’s been spent on the proposal.

The subjects have been cleared on the purchase and the closing date is early in the new year. Porter told the Courier he’s subdividing the property into two parcels.

“We’re subdividing it into lots, one which will retain the house for now and one that we’re able to get a lot in that’s 102-feet wide — so an estate size lot that fits into the neighbourhood, the character of the neighbourhood as it exists today,” he said.

“For now, the other home will remain. There are no guarantees because I will sell it and hopefully recover the money that I’ve spent so far. So there are no guarantees whether the buyer will restore it or choose to knock it down, but at least the opportunity will be there for someone to buy it and restore it. It’s a great house with really good bones. It’s a solid structure, but it would cost a lot of money to modernize. It hasn’t been maintained.”

Porter praised the Vancouver Foundation for giving them the time to try to make the proposal work. He also said the city’s planning department did its best to lend support and expertise.

“I don’t think there were unwilling partners. The fact is the City of Vancouver doesn’t have the policy tools to make that happen in an economically viable way,” he said.

Kent Munro, the City of Vancouver’s assistant director of planning, said through an HRA the city can offer additional density heritage revitalization agreement up to the point of the cost of preserving the heritage.

“I guess from our point of view, we offered them as much density as we could and then it got to the point where they said ‘well in our view it’s not enough and we didn’t come to an agreement,’” Munro said. “They said that the property is big enough that it can be subdivided and they felt if it was subdivided and sold off to two different people it could generate more than this development idea that they had.”

The fact the proposal hasn’t worked doesn’t mean the house is going to be demolished, Munro added, pointing out the city would be willing to work with a new owner on a proposal that would preserve the historic mansion.

In any case, he said the city often deals with development ideas that for whatever reason fall through.

Porter said he thought the proposal would work out.

"As I said, we spent a lot of money and a lot of time and a lot of effort trying to make this work out and I thought it was going down the right road, but in the end I guess the real estate department at the City of Vancouver didn't really agree with the values, so they made a decision that didn't allow it to work out and there's no method of changing that decision."

"I'm absolutely optimistic. If it's on a fee simple piece of land, then there are several options — someone could buy it and use it as a single-family home, someone could go to the city and negotiate a heritage agreement that could preserve the house but maybe vary the zoning. So, yes, there are certainly options. Absolutely."

So apparently there's still time for the 'WilMar for Whisperer' campaign to work it's magic.


Please read disclaimer at bottom of blog.
Posted by Whisperer at 10:09 PM