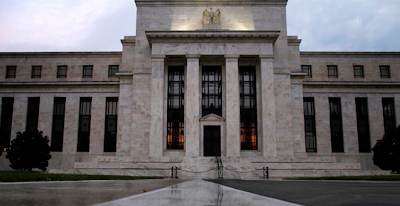 A couple of quotes from an excellent Op Ed piece by Adrian Salbuchi, a political analyst, author, speaker and radio/TV commentator in Argentina.

The article, marking the 100th anniversary of the creation of the US Federal Reserve, is titled: FED up? Hundred years of manipulating the US dollar


Jim Lehrer: “What is the proper relationship between a chairman of the Fed and a president of the United States?”

Alan Greenspan: “Well, first of all, the Federal Reserve is an independent agency, and that means, basically, that there is no other agency of government which can overrule actions that we take. So long as that is in place and there is no evidence that the administration or the Congress or anybody else is requesting that we do things other than what we think is the appropriate thing, then what the relationships are don’t frankly matter.”

Huh? If you’re a US citizen, you should re-read the above once or twice.

But don’t think that the FED’s global financial enslavement system is simply aimed outside the US; it kicked off a century ago by first silently enslaving the very people of the United States it is supposed to serve.


Here’s how that works: every time the US Government decides to put money into circulation – those 1, 5, 10, 20, 50, 100 dollar bills we’re all so familiar with – instead of asking the government mint to print them at a penny’s cost in paper and ink, the government instead asks the private banksters at the Fed to print those bills for the Treasury, in exchange delivering to the Fed interest-bearing US Treasury Bills and Bonds, which translates into trillions of dollars’ in profits funneled to the private banking elite though the Fed.


It was all so well planned a hundred years ago, that just before the Federal Reserve Act was passed on December 23, 1913, they also maneuvered to close this parasitic circle, for if the US Government was to begin making gigantic interest payments to the Fed just for printing its own money, they first needed to have a revenue scheme in place to milk the American taxpayer: the Income Tax Act!

Not that you haven’t been warned. In 1923, Minnesota representative, Charles Lindbergh, father of the famous aviator, sent an early warning: “The financial system has been turned over to the Federal Reserve Board which administers the finance system by authority of a purely profiteering group. The system is private, conducted for the sole purpose of obtaining the greatest possible profits from the use of other people’s money.”

Even president John Kennedy understood this when he issued Executive Order No. 11110 on June 4, 1963, ordering the US Treasury to print zero-interest public money to the tune of 4.3 billion dollars, fully bypassing the Fed. But he too ran into some trouble in Dallas barely five months later on 22 November.


Please read disclaimer at bottom of blog.
Posted by Whisperer at 10:42 PM

Email ThisBlogThis!Share to TwitterShare to FacebookShare to Pinterest
Labels: US Federal Reserve