How overpriced is Vancouver? (Part 2) 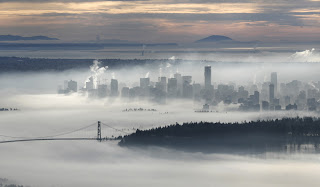 Real Estate Pollyanna's continue to bafflegab on the state of housing prices in Vancouver.

Two days ago, Royal LePage Realty released another manifesto that challenges credibility. Their latest claim? "The tumultuous times that characterized the end of 2008 are not anticipated to define 2009."

And what leads them to make such a claim? Anxious potential buyers looking for guidence in these tulmultous times are offered these tidbits from a January 26th, 2009 press release:

"As consumer confidence levels begin to creep upwards, the country's solid economic fundamentals should lead to a recovery in the housing market. With consumer confidence in tatters, many were reticent about making any large purchases. However, waiting on the sidelines during the normally slow winter market is one thing, sitting out the seasonally busy spring market is quite a different story. Activity levels should rise as the year progresses."

Presumabley Royal LePage will now shift into overdrive to poke and prode the consumer to regain that confidence. As part of that initiative, LePage released the results of a poll it commissioned.

A recent poll commissioned by Royal LePage found that almost half (49%) of Canadians surveyed agree that the economic stimulus measures anticipated as part of tomorrow’s Canadian federal budget announcement will have a positive impact on Canada’s real estate market. Political actions taking place south of the border are also likely to buoy the country’s economic conditions, as the poll found that 82 per cent of Canadians agree that the inauguration of Barack Obama will have a positive impact on consumer confidence in Canada.

So is LePage correct? Is Vancouver's Real Estate market poised to take off like a rocket with restored consumer confidence? Are the recent 'dips' in prices a temporary anomaly representing an outstanding opportunity to purchase undervalued Real Estate at bargain levels?

Not according to a recent survey of worldwide cities. In the fifth annual Demographia International Housing Affordability Survey, Vancouver is ranked as the world' fourth most unaffordable city. Vancouver actually falls into the category of "severely unaffordable" with highly overvalued prices (despite the recent 'dips').

The New York-based Demographia report, released in Canada by the Frontier Centre for Public Policy, looked at third-quarter 2008 data in 265 metropolitan markets, including Australia, Canada, the Republic of Ireland, New Zealand, the United Kingdom and the United States and defines affordable home prices as three times a city’s median income or less.

Vancouver fell behind Gold Coast in Australia, at No. 3, Honolulu, Hawaii, at No. 2, and Australia’s Sunshine Coast, which is in top spot on the least affordable list.

It was factors like these that lead one of the world's foremost economists, Yale economics professor Robert Shiller, to state in 2005 that "Vancouver is the most bubbly city in the world" and that "a violent correction is imminent".

Yesterday the Canadian government, a Conservative Canadian Government who only two months ago pledged they would NEVER go into deficit spending, released a massive deficit budget in order to combat rising fears that the economy is slipping into Depression conditions.

A great time to buy?

Seems to me the R/E Pollyanna's have their heads shrouded in the same fog that has engulfed Vancouver these past two weeks.

Send your comments via email to village_whisperer@live.ca
Posted by Whisperer at 6:22 PM