Contrary to popular opinion... subprime was NOT the spark that started the crash in the USA 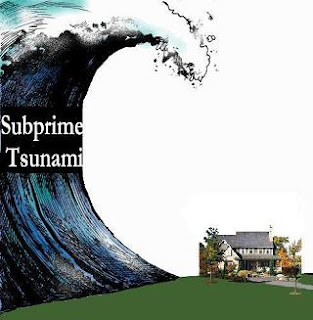 I had a deluge of email regarding my last post when I said, "Subprime did not cause the housing collapse… Subprime simply got caught up in a declining market and – like a wave of dominos – intensified the reaction".

Quite a few people took issue with this. But the subprime sterotype is a viewpoint that has been incorrectly perpetuated.

Subprime loans were never the problem. They were just an early warning signal about shoddy and predatory lending practices. It was falling demand in relation to relatively high levels of supply that triggered a modest drop in house price in bubbly cities such as San Diego and Miami.

When modestly lower prices combined with higher reset rates on the exotic mortgages, it triggered a substantial wave of foreclosures. Suddenly a bloated housing inventory started to overwhelm itself.

And as it did, it gathered steam engulfing those who did not have these exotic mortgages.

A Washington Post analysis of available data shows that many borrowers ensnared in the evolving mortgage mess do not fit neatly into the stereotypes that surfaced by early 2007 when delinquency rates shot up.

They didn't have subprime loans, they weren't borrowers with shaky credit or without enough cash for a down payment.

Instead they were solid working families with good credit who had cash for a downpayment... and they had been caught in a declining market. They are 'underwater' with their mortgages (owe more on their house than what it is now worth because it's value has plumetted) and are seeing their jobs vanish in a crashing economy.

The reality is that the wave of subprime delinquencies has crested.

But by October 2008, for the first time, the number of prime mortgages in delinquency exceeded the subprime loans in danger of default.

Our so-called experts in Vancouver look southward with smug indignation and claim the US scenario will not be repeated here because our banking system does not permit subprime loans.

But I will say it again, subprime did not trigger the US collapse. It was merely a secondary domino that got caught up in the collapse of bubble conditions.

Those in trouble in the United States are not, primarily, lower-income borrowers. The foreclosure crisis has become a wave, afflicting neighborhoods of every stripe -- but particularly communities created by the boom itself.

And that is the vortex into which Vancouver is now being sucked. The absence of subprime mortgages has nothing to do with it. But for some reason our 'experts' cannot - or will not - see this.

The collapse in the States was precipitated by a modest drop in housing prices.

In the first half of 2008, Vancouver began to experience that 'modest drop in housing prices'.

The crash of the stock market and the collapsing world economy is our second domino which is accelerating the conditions created by that drop.

The absence of an overheated market for speculators, the absence of wealthy offshore and US buyers, the absence of local income levels to support the bubble conditions in the Lower Mainland... all of these factors are subsequent domino's which are triggering an acceleration of the collapse.

The failure of our 'experts' to recognize these conditions is why so many Vancouverites are flabbergast at what is happening in our real estate market.

Chris Evans, VP of Onni Group, made this comment when announcing his company's slashing of prices by 40% in a massive liquidation of unsold Condos: “No one could never have imagined the real estate market would drop as much as this.”

Umm, sorry Chris. A lot of people could - and did imagine this drop. And they imagine a drop even greater than what we have already seen.

It's just that our so called 'experts' refuse to realistically analyze what is happening both here and in the United States. They want to pretend that the absence of subprime inoculates us from any reprecussions.

Send your comments via email to village_whisperer@live.ca
Posted by Whisperer at 3:12 PM