Vancouverites start to ask: Is it really a bubble? 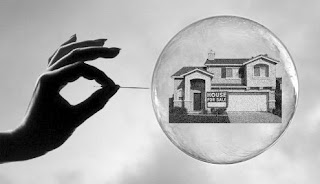 Homeowners in the Village on the Edge of the Rainforest are incredulous. Is it really a bubble?

Many of us find ourselves desperately rationalizing that the current market ‘downturn’ is just a temporary phase… that very soon the upswing will return and ‘asset appreciation’ will be the norm once again.

But many are increasingly fearful that the 'shorterm downturn' may be, in fact, a bubble.

A Bubble, as we have all learned, is a run up in prices going beyond anything that reasonable economic calculation can justify.

But here in Lotusland, we tell ourselves “we are different". Home prices here are not ‘unreasonable’, “my home is really worth this much”.

Or so we rationalize.

But increasingly there is a fear that maybe… just maybe… the naysayers are right. That it might just be possible that the last 9 years have been an irrational bubble.

Do you remember the dot.com bubble?

That was a speculative stock market bubble covering roughly 1995–2001 (with a climax on March 10, 2000 with the NASDAQ peaking at 5132.52) during which stock markets in Western nations saw their value increase rapidly from growth in the new Internet sector and related fields. The period was marked by the founding (and, in many cases, spectacular failure) of a group of new Internet-based companies commonly referred to as dot-coms. A combination of rapidly increasing stock prices, individual speculation in stocks, and widely available venture capital created an exuberant environment in which many of these businesses dismissed standard business models, focusing on increasing market share at the expense of the bottom line

But they didn’t… and the bubble had a spectacular burst.

And now there is a creeping realization that today's home prices aren’t just a recession in the making, but are actually a bubble that has burst and that real estate prices - from from taking a momentary dip - are actually beginning a dramatic slide downward.

Vancouvertites are being forced to ask themselvers some basic questions they have never taken the time to ponder. Have the dramatic surge in prices over the last decade been a reflection of true value? Or are they completely disconnected from the fundamentals that have historically ruled the real estate market?

Let’s face it, if the cost of building new houses had doubled over the last 10 years, maybe it would make sense for the price of old homes to double too.

But they didn’t and it doesn’t.

All that people have heard about the last 10 years is that the boomers are aging, that new technologies have created new paradigms, that China and India have changed things forever, that everyone wants to live in Vancouver and that money will endlessly flow into Vancouver.

In short… that this time it is different.

Next time someone tells you this time is different; tell them “no, it probably isn’t.”

What we really have is a dangerous disconnect between home prices and the basic fundamentals that typically rule the housing market.

In the next few posts we will take a look at those fundamentals, the underlying stresses on our market and then ask the hard, uncomfortable questions… Is our market going to crash? And if it is, how overpriced is it?

The answers are not pretty.

Send your comments via email to village_whisperer@live.ca
Posted by Whisperer at 10:00 PM