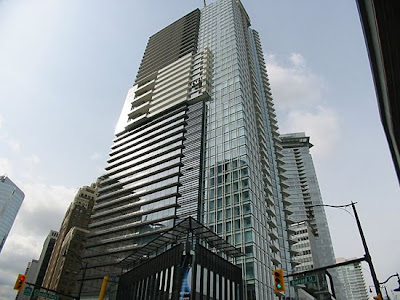 Yesterday we talked about the widespread real estate price-slashing in the Okanagan region of the British Columbia that started with the Bob Rennie marketed development known as Invue in Kelowna.

Recognizing that the market is turning for the worst, it appears Rennie is bringing those price cuts to downtown Vancouver.

The posh downtown Vancouver development known as the Fairmont Pacific Rim Estates and Hotel is an elite hotel/condo development located near the Canada Place Trade and Convention Centre.

Vancouver Realtor Will Wertheim has sent out a tweet on Twitter advising that one of the suites in the Fairmont has dropped it's selling price from $5,250,000 to $3,088,000... a drop of 40% off of the original asking price.

Both are Bob Rennie marketed properties.

News of these stunning reductions come just as the Vancouver Sun hearlds that a wave of presale condos are now flooding onto a slowing market.

MPC Intelligence Inc., a local market research firm, counted 6,659 condo units being put into the marketing phase between March 1 and July 1, 2010. MPC notes that this amount of inventory approaches numbers thrown onto the market during the headiest days of pre-sales in 2007, but at a time when real estate sales are nowhere near 2007 levels.

Just like he did in Kelowna with Invue, Rennie can see what's coming and he's scrambling to stay ahead of the curve.

And that means starting off by slashing real estate prices by 40%.

Curiously... the 'hot asian money' we keep hearing about doesn't appear to be snapping up all these luxury properties at 40% off. Maybe it's because they aren't pre-sale contracts that can be 'secured' for a miniscule downpayment (like the sellout at River Green in Richmond)?

Those presales are the ultimate R/E speculator vehicle.

And that's the difference between 'HAM' actually supporting our market and 'HAM' leveraging a small wager (we call it a downpayment) on a presale contract that's unenforceable in Chinese courts.

In the real market, Bob Rennie is taking on the competition by slashing prices by 40%.

Things could get really ugly this fall.

Please read disclaimer at bottom of blog.
Posted by Whisperer at 5:39 PM