For those who live on the North American West Coast we are entering a 'top seismic window' period (Updated)...

a
You should already be prepared for such a major earthquake here... but if you need an little incentive, watch this clip.

The premise is that recently there have been a series of strong earthquakes on the compression side of the pacific plate. We had the 6.3 in Christchurch, New Zealand last month, the huge 9.0 quake off the coast of north eastern Japan last week, the 8.8 quake in Chile on Feb 27 2010 (Nazca plate which contacts the pacific plate), the 8.1 Samoa earthquake on September 29, 2009.

I am no expert on earthquakes but it makes sense that when we get a series of major quakes around the edges of a major plate, it's likely that those quakes will alter the stresses at other regions of the plate.

Here's a map of the major plates with arrows indicating compression, slippage and expansion zones. (click on image to enlarge) 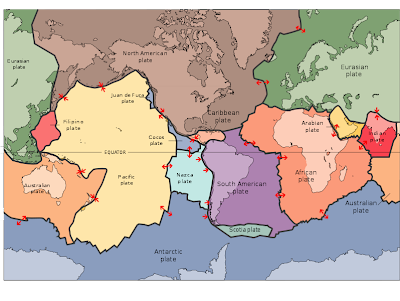 The Cascadia subduction zone can produce very large earthquakes ("megathrust earthquakes"), magnitude 9.0 or greater, if rupture occurs over its whole area. When the "locked" zone stores up energy for an earthquake, the "transition" zone, although somewhat plastic, can rupture.

Great Subduction Zone earthquakes are the largest earthquakes in the world, and can exceed magnitude 9.0. 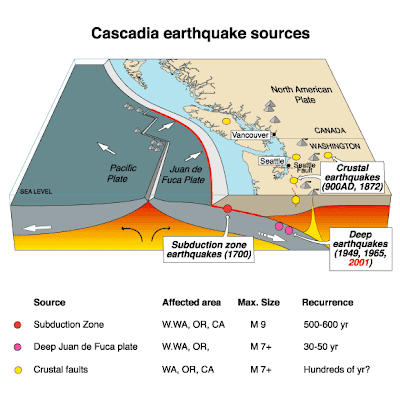 Adding to all this is the fact that the last known great earthquake in the northwest was in January 1700, the Cascadia Earthquake.

Geological evidence indicates that great earthquakes may have occurred in the Cascadia region at least seven times in the last 3,500 years, suggesting a return time of 300 to 600 years.

In other words... it's been over 300 years and we can reasonably expect one anytime between now and 2300.

However, as noted on Wikipedia (See: Prediction of the next major earthquake), recent findings concluded the Cascadia subduction zone was more hazardous than previously suggested. The feared next major earthquake has some geologists predicting a 10% to 14% probability that the Cascadia Subduction Zone will produce an event of magnitude 9 or higher in the next 50 years, with the most recent studies suggest that this risk could be as high as 37%.

Geologists have also determined the Pacific Northwest is not prepared for such a colossal earthquake. The tsunami produced may reach heights of approximately 30 meters (100 ft), creating the same sort of devestation that has hit Japan.

[And just as scary, the Hanford Nuclear Plant in Washington State was built to withstand a 7.9 level earthquake... not a 9.0 quake]

If this wasn't enough, Geologist Jim Berkland outlines in the clip above that the months of October, March and April are the worst months for devestating earthquake damage.

On the 19th of March not only will we have the full moon, but within an hour of that we will have the closest approach of the Moon until the year 2016.

And the next day is the equinoctial tides.

So... (1) we are in the March/April period, (2) we have a full moon and (3) we have the closest approach of the Moon until the year 2016. This brings together three of the maximum tide raising forces.

In addition to this, when you combine the ocean tides with the earth tides and the tides in the ground water, all of these factors help to release sudden, built up strain and cause earthquakes.

Berkland calls this is a "top seismic window" which will develop between the week of March 19th to 26th.

It may be nothing, but it can't hurt to be prepared.

Pass the link to this post on to as many people as you know who live on the West Coast.

Please read disclaimer at bottom of blog.
Posted by Whisperer at 10:31 PM

Email ThisBlogThis!Share to TwitterShare to FacebookShare to Pinterest
Labels: Earthquake