Is Bernanke preparing to seriously devalue the US dollar vs Gold? 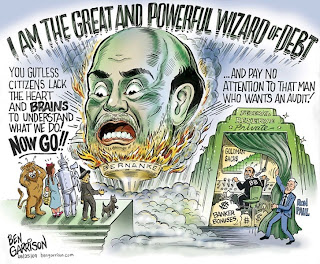 Yesterday we wrote about how the large commercial shorts in Gold and Silver - the largest, best funded and presumably the best informed traders of gold and silver futures on the planet - complete a historic one-week drop in their net short positioning for Gold and Silver futures traded in New York on the COMEX division of the CME.
This accelerates a pattern undertaken when the price of Silver was hammered down by 35% at the start of May.
This all plays out as QE2 is coming to an end and the Federal Reserve announces there are no plans for QE3.
Nobody reasonably believes there will be no form of QE3, but many pundits have speculated that there will be a break between QE2 and QE 3.  And during that time those same pundits expect the stock market - and commodities - to take a big hit.
So why are the commercial shorts bailing?
There are a great many people who believe they know what's coming next from the Federal Reserve.  They say Ben Bernanke has already told us.
As a Princeton professor in the 1990s, Ben Bernanke lectured Japanese officials for mishandling their economy. Then, in 1999, Bernanke took Japanese officials to task for failing to get their economy moving.
If you go back to that time, it had been 10 years since Japan's stock market peaked in 1989. The decade between 1989 and 1999 had been devastating (and eerily similar to what is happening in the US now).
Japan's property bubble popped in 1991. After that it averaged annual growth of just 0.7%. Its national government debt has soared to more than 200% of its national output. And during seven of those 10 years its consumer prices fell.
All this happened even though the Bank of Japan has held short-term interest rates at or near zero and had taken other stimulative steps such as buying government bonds and short-term corporate debt.
As Japan failed to pull itself out of it's malaise, Bernanke spoke from his ivory tower lectern:
Bernanke listed his recommendations, most of which he has also applied in the United States as Federal Reserve Chairman.  And as those policies have failed to take traction (viewed as sweet vindication by those Japanese officials he lampooned), Bernanke isn't done with his 1999 recommendations.
Many pundits believe that QE3 is going to come in a different form from what we have seen already.
In  1932, Roosevelt proceeded to the next step: currency devaluation vs. gold to promote monetary easing.
Bernanke has staked his entire reputation on being the great student of the Depression.  In his 1999 speech he said:
Is currency devaluation vs Gold Bernanke's plan for QE3? Is Bernanke preparing to "try anything that isn't absolutley guaranteed to work" including allowing Gold to rise substanially vs the US dollar?
Is that why the commercial shorts - who work in tandem with the Federal Reserve to suppress Gold and Silver to support the US dollar - are now bailing on their shorts at a historic pace?
Interesting times indeed.
==================

Please read disclaimer at bottom of blog.
Posted by Whisperer at 7:00 PM