Real Estate Prices are continuing to fall in Victoria 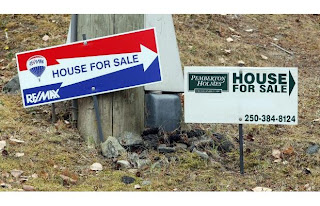 Back in April we posted that the noose is tightening on the larger periphery around the Village on the Edge of the Rainforest.
The Victoria Times-Colonist reported that, "The first quarter of 2011 has proven to be a tale of two real estate markets in B.C. - the Lower Mainland and everyone else."
In April real estate sales in Victoria were down 18.1% and the average price fell 2.8%.
Last week the Times-Colonist reported June data. According to Royal Lepage, the average selling price of a detached bungalow in Greater Victoria has now dropped nearly 5% in the last year.
As expected, the local Royal Lepage representative tried to put a positive spin on the data. Carol Geurts of Royal LePage Coast Capital Realty said:
Prices are down nearly 5%, but the average price decrease for 'most' homes was less than 2%?
What is she suggesting?

Is it that only the crappy homes and/or the homes being sold by desperate sellers that are dropping in price?  Is she saying most homes (meaning yours) aren't really dropping in price so you don't need to worry about these negative statistics?
Uh-huh.
As our friends over at World Housing Bubble blog have noted, this sort of rationalization was seen in California at the start of the American housing bubble burst. Realtors would argue in the press that while the value of houses for sale was dropping, the value of houses that weren't for sale was holding firm.

Look for this sort of spin to ramp up over the coming months.
The Times-Colonist also noted that the price of a new home in Victoria dropped 1.7% and in Vancouver it dropped 0.8%.
We will watch these trends with great interest.
==================