Why the emphasis on Silver (and Gold)? 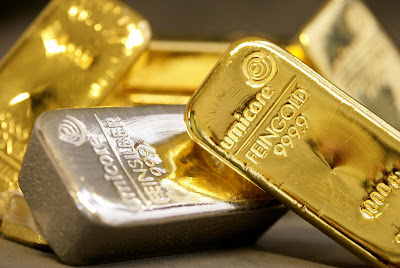 If you didn't get a chance to check out yesterdays post, The Debt Days of Summer, please take a moment to read it. In many ways today's post rounds out Thurday's post on local real estate, Friday's post on Silver, and yesterday's on Sovereign Debt.

There are three central themes on this blog: Sovereign Debt, Real Estate, Silver (and Gold).
The connection, we like to believe, is simple.

Sovereign Debt will force interest rates up as the cost of borrowing money becomes critical.  High interest rates will crash the local Real Estate bubble, and the mad dash to print more money to rescue the economy/salvage Sovereign debt will drive the value of Silver and Gold parabolic.
Others in the blogosphere disagree with the last component.
This blog has tried to demonstrate why we believe Silver and Gold will increase.

It's important to understand, it is our belief that a return to a Gold Standard is not the solution to the world's woes (more on that another time).  However, we do believe there will be a mad dash into Silver and Gold, thus pushing those precious metals exponentially higher.
Further evidence of that trend came out this week from the Bank of International Settlements recent annual report.
According to the Financial Times, the central banks of the world have pulled 635 tonnes of Gold from the Bank for International Settlements in the past year - the largest withdrawal in more than a decade.
This marks a sharp reversal from the previous year when central banks added to deposits of gold at the so-called “bank for central banks” rather than lending it directly to the private sector amid growing concerns over counterparty risk.

The central banks of the world are loading up on Gold.

Why?
As the website Seeking Alpha observes, If you’re a central banker and you actually believe in the value of paper money and your ability to create wealth by printing it... why would you be loading up on Gold?
The central banks of the world are in a competition to devalue their respective currencies against each other. They will work together to suppress a particular currency if a carry-trade gets too out of control (see Japan earlier this year), but in general the ECB wants a cheap Euro, the Fed wants a cheap Dollar and so on and so forth.
These guys know that the financial system is broken. They’ve known it for over a decade (Greenspan even admitted that derivatives could “implode” the market in 1999). But they’re going to kick the paper money can down the road as long as they can… primarily because the entire financial system is banking on their ability to “fix” things.

(And this is why many blogs written by economists or other financial planners/experts eschew Gold and Silver.  Everything they have been taught, everything they know about finance, is wrapped up in their "faith" that the central bankers can "fix" things.)
The 2008 crisis was the first taste of systemic risk. The central banks threw everything including the kitchen sink at the problem in an attempt to hold things up. And it’s worked temporarily in the sense that the financial world still believes central banks can handle the situation.


However, the fact remains that the central banks actually didn’t fix anything. You can only fix a debt problem by paying the debt off or defaulting. Moving it around and issuing more debt to meet current payments does nothing to solve the problem.
In this sense, the world’s central banks literally “bet the farm” on themselves and the view that sovereign balance sheets can stomach this toxic waste. As we’re now discovering in Europe, the laws of the markets (oversaturation of debt, default and the like) apply to countries as well as private banks.
The central banks know this and are now acting accordingly. It is not coincidence that they became net buyers of Gold within two years of the 2008 crisis.
Nor is it coincidence that they are now loading up on Gold at the fastest pace in over a decade.
They know (not think) that systemic risk is still on the table in a big way and that they will be powerless to address the next crisis when it explodes.
You can already see this in their public statements.
Bernanke himself even admitted the Fed has no idea why the economy isn’t recovering.
If you extend the implications of this statement it becomes clear Bernanke and pals are realizing that printing money is not going to patch up the financial system.
Hence the Gold purchases.
In plain terms, the real crisis, the crisis that was put off temporarily during the last two years, is coming.
It will not be a crisis of stocks or bonds. It will be a crisis of the financial system itself. A crisis in which entire countries default. And it will make 2008 look like a picnic.
The central banks are suppressing the price of Gold and Silver right now to support the value of the world's reserve currency - the US Dollar.
A by-product is that it is making the acquisition of Gold and Silver a steal in terms of value when compared to what is coming. And the central banks of the world are snapping it up at these bargain basement prices at the fastest rate of central bank acquisition in over a decade.

Do you think they are doing this because Gold/Silver are in a bubble and vastly overvalued?