Are we heading for a Cataclysmic Correction? "That's bunk", says Sommerville 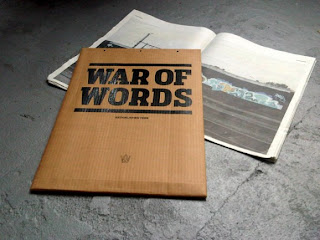 The war of words is heating up in Vancouver's housing bubble.

Yesterday it was CBC's profile of Vancouver and today CTV picked up on the story.

Former Member of Parliament, and noted critic of the Canadian housing bubble, Garth Turner was profiled on CTV with his warnings about our overblown Vancouver Real Estate. 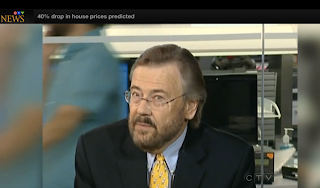 "I hope people are listening. This message needs to be heard. Sales in August were pretty awful and they continued to deteriote through September. But you know what? This is going to be a year or two or three before we hit bottom. And I think the market could lose 30 or 40% of it's value."

To balance Turner's warnings, CTV turned to the resident market defenders we have come to know and love the last few years: Tsur Sommerville  - Associate Professor, Real Estate Foundation Professorship in Real Estate Finance; Director, UBC Centre for Urban Economics and Real Estate (As one VCI contributor said... can we possibly use the term 'real estate' any more often in a title?) and Helmut Pastrick, Chief Economist for Central One Credit Union.

CTV tells us these local economists are shrugging off suggestions that our real estate market is setting itself up for a collapse.

Our buddy Sommerville doesn't mince words as he tries to deflect the rising angst about the worsening market dynamics by attacking Turner directly. 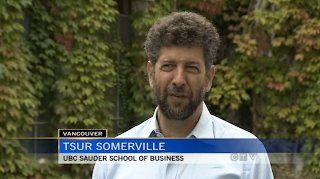 "He's being saying this for like four or five years. So if you keep saying this then possibly one time you could be right and then you get to be a genius."

Oh? What are you saying Tsur? That the reality is that - at some point - the market is going to collapse 40% in value and that it's a no brainer Turner will be right if he keeps repeating this mantra?

It begs the question, if you believe the market will collapse by 40% at some point, when do you think that will occur?  But I digress.

As for suggestions that the market collapse will be triggered by rising household debt, Sommerville is even more blunt:

"That's bunk. In order to get dramatic change, dramatic drops in housing markets, there has to be... the market has to be pushed."

And rising, unsustainable household debt isn't the lever that will push the market?

Next we cut away to Helmut Pastrick to pick up the theme dismissing a possible collapse as a result of rising household debt: 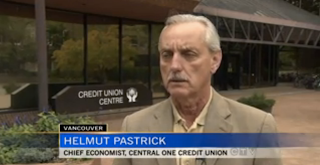 "It could only be the result of a major economic recession, a downturn, or perhaps a financial crisis, a political crisis, typically outside of BC's borders."

Garth Turner counter's that our region is so overvalued, the outside forces Pastrick refers to aren't needed.

CTV then quotes several 'average' people and captures them in quintessential denial that any such  collapse is possible. The whole dilemma is summarized as divergent opinions common to the spectre of real estate.

If you want to see the full CTV story, it could not be embedded. You can watch it here.


Please read disclaimer at bottom of blog.
Posted by Whisperer at 7:36 PM