It's different here... we have a culture of Real Estate you cannot rip apart with logic 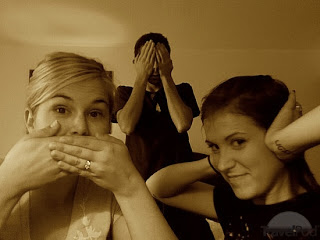 On Monday, as you will recall, we told you how the Huffington Post: British Columbia picked up on US Housing Guru Robert Shiller's interview on the Business News Network (BNN) last week in which Shiller said

"Vancouver’s housing bubble is more extreme today than California’s was a few years ago."

Robert Shiller, co-creator of the Case-Shiller Index, which measures U.S. house prices, told BNN that "Vancouver looks like part of California" when it comes to its housing market.

Of course those that live her in the Village on the Edge of Denial see things differently.
We told you how economists like Tsur Sommerville argue the slowdown does not mean the market was ever in a bubble. Somerville, director of UBC’s Centre for Urban Economics, said the Vancouver market hasn’t had the kind of irrational exuberance that bubble market exhibit. His argument: we're not in a bubble therefore:

“You can’t burst a bubble that wasn’t there.”

This is the same Tsur Sommerville who, on June 29th, was interviewed by Global TV and insisted that Vancouver is different... the fundamentals of the market simply don't apply here:


Sommerville: Now we have a situation where prices aren't rising, they're flat. We have a situation were listing are rising, sales are falling and there isn't any of the kind of angst or anxiety out there in the marketplace. Instead what it's replaced with is less worries about people driving prices up and more worries about Greece blowing up the world economy.


Global Reporter: Vancouver is that market that is way different than any other kind of market.


Sommerville: Vancouver is very hard to figure out because so much of the purchases are done by wealth. Either people immigrating with wealth or people receiving wealth from parents or relatives so the normal 'what are incomes doing and what are prices doing', that just doesn't work out here well.


Global Reporter: And that may explain that while there are price reductions, average selling prices just aren't going down. Unlike other depressed markets in the world, there's no pressure to sell. And with our geography, the mountains and the ocean, it's not likely to change.

Denial and insisting It's different here.  That appears to be the theme.

Even Bob Rennie jumped into the act. On Rennie's Facebook page, the Condo King posted a rebuttal to the Huffington Post article (click on image to enlarge): 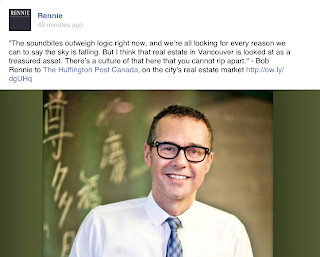 
"The soundbites outweigh logic right now, and we're all looking for every reason we can to say the sky is falling. But I think that real estate in Vancouver is looked at as a treasured asset. There's a culture of that here you cannot rip apart."


Please read disclaimer at bottom of blog.
Posted by Whisperer at 11:58 PM