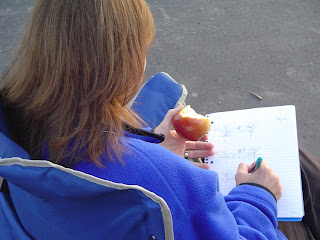 Real Estate sales for the month of September are now officially over.

Vancouver Realtor Paul Boenisch, who provides the figures you see on your right, hasn't provided an update yet so we don't have figures for September 28th at this time.

Another realtor (Rob Chipman) has indicated that we closed out the last sales day of September with only 64 sales.

That will make September 2012 worse than September 2008 and the worst sales total for the month of September since 1994 - when they started compiling these records. This, as you know, follows a summer that was just as abysmal. 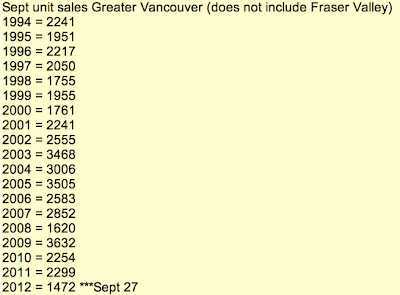 Sales in the suburb of Richmond (formerly a HAM hotbed) continue to be horrendous as well.  Early speculation was that there would be an increase in sales (from homes that had drastically reduced prices below assessment), but even this trend collapsed.

There are currently 1,187 single family houses listed for sale in Richmond. As of yesterday there had only been 53 sales. 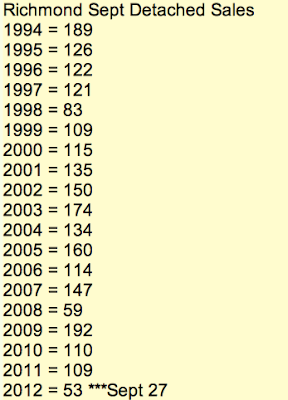 That puts also Richmond on pace for the worst September since 1994.

(hat tip to Inventory on VCI for both of these charts)

Observer (from Vancouver Price Drop) notes that the downtown core is starting to see price movement on condos available for sale. 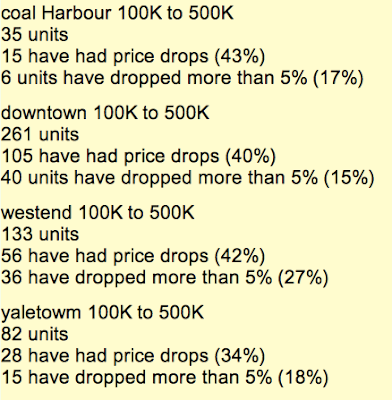 It has everyone keenly watching to see what will happen now in October.

As we noted on Thursday, one Vancouver realtor is forecasting weaker sales in the coming months based on historical data. This is a trend which Jesse, from the excellent blog Housing Analysis, originally identified early in September.

Will be see surging inventory to match this anticipated drop in sales?

October/November historically see the pace of listing decline significantly.  If someone was going to list for fall, they usually do it in September.  Does this mean listings have peaked for the year?

Van West and East SFH were really some of the only places that were up last month over the previous month. West Van was up but Aug was really low so no surpirse.

Richmond actually fell even more. It is now down really to a basic trickle. However, Richmond sold way more new builds on large price reductions than tear-downs, which did not seem to sell at all. Condo prices are down. On an average basis, we are down pretty much 5% from last month.  SFH prices were actually down on average but there were some really odd movements in median. There has been a recent slow down of the lower priced tear downs but an increase in the higher priced properties (who have not moved for months – so are now getting big price reductions). It’s like a wave motion where these high priced places finally take price reductions – some after 10-18 months.

Burnaby, North Van and West Van sold about the same at approx 40 units.

Inventory increases were large in Van-East attached (13%), North Van SFH (22%) and Burnaby (9%) from the previous month. MOI has just reached 12.0 for REBGV (remember that PaulB includes land/multi which REBGV excludes.)

Sales in final half of month was at a pace which was 5% above the first half. This is typical. September is supposed to be busy – it wasn’t – no matter how you slice it – it was terrible – but September did tick up from August.

Thus we should see about 1900 units sold this October. It’s a bit to do with the business days / weekend but 1900 is really possible at today’s sales volumes – this will lead to MOI of 9.8 for Oct. That is not really great but it is a turn from Sep.

October 2012 will not fall to the 2008 levels – not even close – it’s just not possible. Although we are at 12 for MOI now, we can not expect that to continue and can not expect inventory to increase any more. It may end Oct at the same level as Sep – but we are done. The year is over – it was bad. If you take the YTD sales, I think we are the worst in 15 years. Perhaps when we are done, we will be below 2008.

As always the unfolding story of the real estate bubble is fascinating to watch.

In 2008 the dismal sales were triggered by the Financial Crisis.

This time around sales are coming in worse than 2008. But, unlike in 2008, collapsing sales will not see intervention from government to prop up the market this time around.

Have we only delayed the reckoning that should have occurred in 2009, and it is finally playing out now?


Please read disclaimer at bottom of blog.
Posted by Whisperer at 2:36 PM