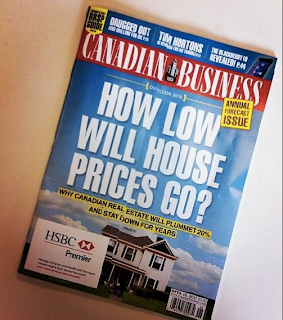 Canadian Business Magazine joins the media attention on our housing bubble with an article that asks: How Low Will House Prices Go?

Before every housing correction, there’s a Looney Tunes moment. In the animated universe, there’s a gravitational peculiarity that briefly suspends an overzealous pursuer in mid-air, just long enough to flash a HELP! sign, before plummeting off the cliff he failed to navigate. When it comes to overheated real estate, there is a pause that follows the outset of a correction, during which the market fails to realize there is nothing below but air. 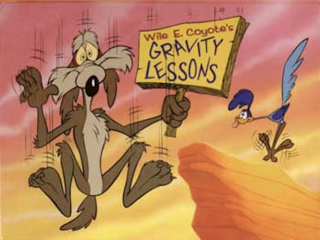 Ahh yes, the Wile E. Coyote moment.  Two weeks ago it was Macleans insisting that we were there, now it's Canadian Business Magazine.

The pattern is familiar: it starts with slowing sales activity. Listings begin to generate fewer offers. Would-be homeowners start to see the sense in holding off. In Toronto, where less than a year ago a rundown semi-detached could sell for $100,000 or more over asking price, the era of the bidding war is fading. “Buyers are sensing that prices are going to come down, so why buy now?” says Thomas Neal, a Royal LePage agent in Toronto, where housing transactions in December slid by 25% from the prior year. In Vancouver, the number of homes sold last year trailed the 10-year average by 25%. It is in those two markets where the twin epicentres of the Canadian housing shakeup reside. But the ground is beginning to shift under the national market as a whole. Those kinds of numbers support the view that “a potentially severe housing correction is underway,” says David Madani, an economist at Capital Economics, who for months has been predicting a 25% decline in Canadian home prices.

Which brings us to where we are now... the denial stage where sellers refuse to acknowledge the shifting market.

As usual, one-half of the market refuses to look down. “We’ve got a number of sellers who say, ‘If we’re not going to sell for a particular value, we’re not going to sell at all,’” says Victoria real estate agent Tony Joe. “A lot of people are still pricing their properties based on yesterday’s market.” So, even though demand is weakening, prices have yet to fall for most of the country.

The reluctance of sellers to compromise is understandable, given recent history. For more than a decade, real estate in Canada appreciated almost without interruption. Even the financial crisis and ensuing Great Recession registered as little more than a blip. Meanwhile, most economists take the current trends as indicative of a “soft landing” for the sector, with just a slight moderation in prices afoot. But asking a bank economist or real estate market insider about the likelihood of a soft landing is like “asking your barber if you need a haircut,” says George Athanassakos, a finance professor at the Richard Ivey School of Business, who expects a “severe correction,” and soon. The current resilience in home values could simply be the brief mid-air pause before physics brings about the plunge fated for inflated housing markets and cartoon coyotes alike.

People tend to have short memories about real estate, Neal says. Since 2000, the average home price in Canada has shot up by 125%, which has reinforced the perception that residential real estate is infallible.

So what will trigger a slide?

Just as excessive faith in home appreciation can overheat a market, so too can a change in sentiment accelerate and intensify the downside. With the rate of home ownership now close to 70%, and with household debt at a record high, much of the financial health of Canadian households is inextricably linked to home values, making it the kind of dominant concern that not only affects household finances, but consumer psychology and confidence.

Even most bank economists believe Canadian housing is overpriced somewhere in the range of 10% to 20%, perhaps more so for the hottest condo markets. That’s manageable as long as interest rates and unemployment remain low, says Doug Porter, deputy chief economist at BMO Capital Markets. Absent an external economic shock that would ultimately put Canadians out of work, there is no reason to expect markets to correct hard and fast, he argues. “What would force people to feel that they have to sell at much deeper prices, given that the interest rate environment is likely to remain quite benign at least through next year?” Without a trigger, there should be no national housing crash, Porter says.

Ahh yes, the lack of a national trigger. That's been Tsur Somerville's argument.

But there are some mortgage professionals who argue that the catalyst for a national reaction has already arrived by way of the federal government, which deliberately cooled the market by tightening mortgage regulations. Those changes would have disqualified almost 10% of all 2010 homebuyers, according to a report by Will Dunning, chief economist for the Canadian Association of Accredited Mortgage Professionals. “That’s taking a lot of demand out of the market,” Dunning says. “You’re putting the housing market at risk, and the broader economy.” Now Dunning says the market is “weak enough it could result in prices falling in many places across the country.”

And under these conditions, which group of seller's might panic and bail on the market?

In 2011, Toronto had record condo sales of more than 28,000 units. “The kind of construction we’ve seen is absolutely off the charts,” Porter says. “It is the kind of market that is so heavily supported by investor demand, we could have a temporary spell of a pretty serious correction.” Investors are potentially more likely to sell when prices decline, which could ultimately flood the condo market with resale listings. With 240,000 more planned condo units yet to be built in the Toronto area, many are worried about a burgeoning supply-demand imbalance. Already, investors are backing away from the Toronto condo market, which reported a drop in third-quarter unit sales of 30%. Developers reacted to both slowing sales and a record high level of unsold inventory by launching just five new projects in the third quarter in the 416 area, which typically sees 15 to 20 new projects per quarter.

Investment demand also looms over Vancouver, where the condo market spent most of the year in full retreat. Since May, the benchmark condo price in Vancouver has already fallen by 13%. If the expectation of appreciation disappears, another layer of demand could shrink from the market. Ohad Lederer, an analyst at Veritas Investment Research, calculates that investors buying condos to supply the rental market are accepting annual returns of less than 4%. “That only makes sense if buyers believe that prices will go up.” But if prices in those two markets fall significantly, as Lederer believes they will, condo investors could face some tough decisions. “That’s where the intestinal fortitude of those investors will be tested,” he says.

The market has 'softened', to use the R/E industry phrase, but it has not crashed hard - yet. So we still have a saw-off in analysis which each side firmly sticking to their positions about where we are going:

The stability of housing in Canada relies on a Goldilocks economy—not too strong and not too weak. Economic expansion could lead to rate hikes, which would expose the unsustainable finances of many indebted households. On the other hand, a destabilizing economic event could trigger the housing crash Canada avoided in 2009. The historic crash in the United States is not likely to be repeated here. The U.S. bubble was more a product of risky lending. “A lot of people were allowed to take on debt with little or no prospect of paying it back,” Porter says. In Canada, debt is better distributed among middle and upper-income borrowers, he says. “There still is a relatively solid credit-vetting process in Canada.” Still, many Canadian homeowners are stretched thin. According to a Euro Pacific Capital report, high-risk mortgages make up more than $500 billion of Canada’s $1.1 trillion housing market.

The average home price, at more than $350,000 (which is double the median existing home price in the United States), now sits at about five times the average household income. Housing investment is close to peak levels at more than 7% of GDP—about the measure reached in both the late 1970s and late 1980s, Athanassakos says. “Right after that, the market collapsed in both cycles.”

Canadian demographics no longer support inflated prices, Athanassakos argues. The proportion of Canadians of the age when homes are typically purchased is at a turning point and is set to decline, which historically has been a powerful indicator of housing trends. “The long cycle is most of the time affected by demographics,” he says. And a very long cycle it could be. He foresees a 20-year span of declining home prices. There need not be an explicit economic trigger for an acute housing correction. The imbalances are already there. Changing sentiment could be the spark, Lederer says. “When it turns, it turns very fast.”

And Canadian Business Magazine gives Athanassakos' prediction prominence making it clear where they think we are going:


Please read disclaimer at bottom of blog.
Posted by Whisperer at 12:14 PM