Major developer reprimanded over unauthorized use of provincial logo. What about counselling home buyers to circumvent 5% down payment requirements? 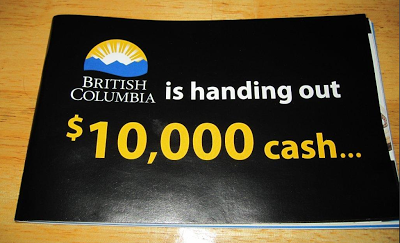 In our last post we told you about the pamphlet pictured above which had come out for a Langley condo development.

Seems that pamphlet got the attention, not only of this blog, but of the Provincial Government.

As a faithful reader pointed out in our comments section, the Vancouver Province reported that a Major developer was reprimanded over unauthorized use of provincial logo to help sell condos.

A major condo developer has been reprimanded by the B.C. government for the unauthorized use of the provincial logo in a promotional brochure for a new development in Langley.


Quadra Homes agreed Thursday to delete all references of the government’s registered logo from its website and to destroy the remaining promotional brochures for the development, named Yorkson Creek, which carried the B.C. logo on its front and back page.

The issue came to head on Wednesday after The Province contacted the Ministry of Finance asking about the 28-page, glossy brochure, which began arriving on doorsteps in the Langley and Abbotsford areas within the last two weeks.

The Provincial Government’s first-time homebuyer’s bonus of $10,000 was detailed in the first few pages of the brochure. But the rest of the pages are dedicated to the benefits of buying at Yorkson Creek.

“It is not just misleading, it is wrong,” said Doug Bigg, who received the brochure last week. “I interpreted it as taxpayers' dollars being used to advertise condos for a multi-million dollar corporation. If I thought that, then I’m sure most other people would think that.”


But the government had nothing to do with the brochure, the Ministry of Finance said. And on Thursday, the company was ordered to remove all unauthorized references of the logo.


“This unauthorized use must cease immediately,” part of a letter sent to the company read. “Failure to do [so] in a timely manner may lead to further action on our behalf.”

Personally I think there is more to this than just misuse of the Government's logo and misrepresenting their endorsement of the development.

As Garth Turner noted this week, house buyers needing 95% financing are not allowed to borrow the last 5%, or their loans won’t be eligible for CMHC mortgage insurance.

Turner cited the story of a banking loans officer wherein the...

banking loans officer suggests that he take out a 10k line of credit, give it to his father, so his father can give it back to him with a gift letter. Voila, 5% down.

Turner proceeds to point out that this arrangement circumventing the 5% down payment is illegal.

If that is true, is the Langley brochure doing something just as illegal?

Note this page of the pamphlet:

It suggests that first-time buyers: "Borrow the down payment from your favourite Uncle and pay him back when you get the $10,000."

Isn't that exactly the same as Turner's example?


Please read disclaimer at bottom of blog.
Posted by Whisperer at 7:32 AM