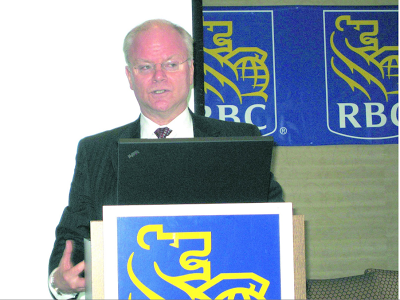 Ferley captures out attention for some comments he made on the Business News Network earlier today.

Muir comes on the program carrying the "there is no bubble" standard that he and Tsur Somerville have been pounding for the last little while.

He insists that, after surviving the Great Financial Collapse of 2008, if the Vancouver Real Estate market hasn't collapsed yet then it won't.

As if to point out the absurdity of his comments, while Muir was insisting the Vancouver market has been 'flat' since 2008/2009, BNN flashed across the screen the fact that Vancouver home sales were down 31% year over year in December. 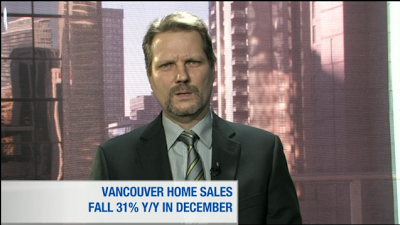 BNN notes how jarring the statistics for sales declines are. Does this not concern Muir?

As always our buddy Cameron dismisses the poor sales, insisting all signs are for positive growth. Muir jumps on the fact that November and December saw sharp pull backs in the number of listings on the market - conveniently ignoring that this happens every year in November and December.

But as we showed yesterday, the number of active listings on the market right now is far higher than in previous years.

BNN contrasts this with comments from Paul Ferley, assistant chief economist at RBC Capital Markets.  Ferley says the bank's research on housing affordability in Vancouver showes that prices in the city had become frothy.

"Certainly the Vancouver numbers have been suggesting stresses in that market with affordability deteriorating and at some point a correction was likely going to have to play out. It was a market looking like it was poised for a correction."

Ferley adds that while prices have yet to fall as dramatically as sales, the city could be headed for "double digit" declines in home prices.

“You're seeing a correction in Vancouver – a fairly sizable one."

The focus on the Spring Market ramps higher with each passing day and the stage is set with Muir and Somerville firmly staking their reputations on a crash not happening. 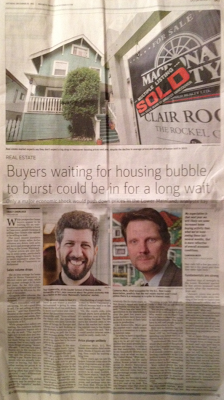 Posted by Whisperer at 8:10 PM