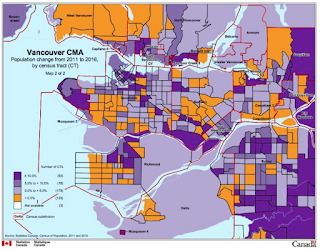 So the 2016 Census data was released today and created quite the bit of commotion on Twitter this morning.

While most municipalities in the region are showing moderate population growth, certain areas are showing no growth whatsoever.  West Vancouver is the fastest shrinking city in the Lower Mainland.

Vancouver's west side is stagnant as is Richmond's.

Now all of this data is curious because the narrative has been that everyone is moving here and that is what is driving our housing prices through the roof. But BC doesn't crack the list of the top 3 provinces for population growth (Alberta 18%, Saskatchewan 6.3%, and Manitobia 5.8%).

Look for the real estate cartel to immediately start it's media spin to defend it's push for higher density and rezoning.  We'll see if that's the big theme in the coming days.

Meanwhile, check out this humorous Craigslist post for west side Vancouver accommodation... 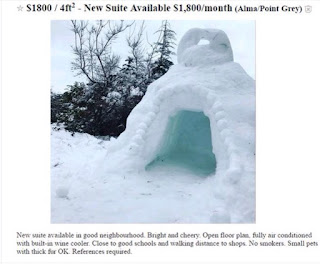 
Please read disclaimer at bottom of blog.
Posted by Whisperer at 1:00 PM