Wed Feb 1st Post #2: Did you know the Housing Bubble in North America was deliberately created by the Feds? 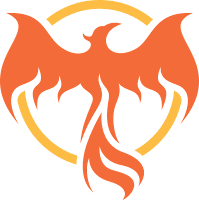 Since we are returning, we thought we'd throw up a few posts reviewing how we got to where we are with our Canadian Housing Bubble.

With all the intense press attention on our housing bubble over the last year or so, China has become the scapegoat for all our housing woes.  And while the world is awash in Chinese money today, it's important to acknowledge the home grown roots of our problem.

And to understand that... it's crucial to recall how the CMHC was specifically instructed by the Harper Conservatives to create our housing bubble.

It's true.  What is even more astonishing is that the United States also deliberately created their housing bubble too.

Both nation's predicaments were deliberately crafted.

After the dot com crash of 1999 and the 2001 terrorist attacks, America had a choice of entering a painful recession (which critics say was desperately needed to correct the imbalance of excessive monetary stimulus in the 1990s) or politicians could kick the can down the road and artificially inflate the economy.

Yes... you read that correctly. To offset a morbid economy, leading economists were recommending that the US Government and the US Federal Reserve create a housing bubble so that consumers could use that 'sense of wealth' to drive the economy with consumer spending.

The creation of a housing bubble was a deliberate economic stimulus move.

And Canada followed America's lead on this.

Following the lead of Republicans in the US, the Canadian Government saw the success of this plan and began pumping the Ownership Society as well. Gifts, incentives and inducements were showered on home buyers and the result was demand swelled, prices popped and a bubble was born.

The main vehicle for these inducements was the CMHC, or the Canadian Mortgage and Housing Corporation. Founded after World War II to provide housing for returning soldiers, the CMHC's role has grown dramatically in the following 70 years.  A Crown corporation owned by the Government of Canada, it's main function today is  providing insurance for residential mortgage loans to Canadian home buyers. (Note: This insurance isn't for the Canadian who buys a home, rather it protects mortgage lenders against mortgage defaults by home buyers on mortgages with less than 20% down)


Here's how CMHC and mortgages in Canada evolved in the 2000s:
Right there, in all those details, is where all the money originated to fund our housing bubble.

Conservative Prime Minister Stephen Harper's government altered mortgage and tax rules to the point we had the zero down, forty year mortgage. They allowed Canadians to raid RRSP's for down payments. They created the Home Reno Tax Credit. They gave us the first-time buyer's closing cost gift and they instituted the infamous 'emergency interest rate' which has kept interest rates artificially low since 2009 - an astonishing 8 years!

Harper's Conservatives gave us more pro-real estate initiatives than Canadians had seen in the last quarter-century.

The most astonishing element, in addition to of all this, was something that has been effectively buried. Something that, now that the mainstream Canadian media have finally turned their attention to the chaos being created by all this malinvestment in Real Estate, are completely unaware of.

Back in 2009 we profiled series of excellent articles put out by Murray Dobbin. One of them, Dobbin's 2009 article titled 'Why Canada's Housing Bubble Will Burst', garnered significant interest in the blogosphere. In that article he stated:
That's a stunning statement. He's saying the Harper Government specifically directed the CMHC to approve risky loans in an attempt to keep the economy afloat and blow the Housing Bubble even bigger.

Shortly after the article was written, this blog contacted Dobbin and asked him about the source for this comment.

Dobbin stated he got the reference from a CMHC report which was freely available on the CMHC website.

Your dutiful scribes from this blog checked out the document and read it personally.  Unfortunately we did not download a copy (and if anyone out there did, we would love to know).

Dobbin's statement was confirmed, CMHC stated in that document that they had been directed by the government to approve as many high-risk borrowers as possible.

A few months later, when a curious reader asked us about the source for this quote, we went to the CMHC site to forward the link to the report.  It was then we noticed the report had been removed.   When we asked Dobbin about it, he also noted (with surprise) that the report was gone from the CMHC website.  Dobbin also had failed to download a copy.

Dobbin columns had obviously struck a nerve and CMHC were directed to remove the document from their website.

Curiously Wikipedia incorporated Dobbin's information into it's database about the CMHC.

Don't bother to look for it now, tho. Curiously, when we went to reference the site for our original post on this several years ago we discovered that the Wiki CMHC page had undergone a significant sanitization.

In Slide #7 it states: "In 2008, Canadian home prices started to dip as affordability become the worst on record in many cities. CMHC publicly admitted that it was ordered to approve as many high risk borrowers as possible to prop up the housing marked and keep credit flowing."

That is a stunning acknowledgement.

When the American housing bubble popped in 2008, the Conservatives bet heavily they could shield our boom from the 2008 financial crisis. What they did to add fuel to a powder keg which has now grown insanely large as other Central Banks (US Fed and Peoples Bank of China) have flooded the world with Quantitative Easing and excess credit.

But make no mistake. The foundation of this massive bubble started at home - with the manipulation of CMHC policies. 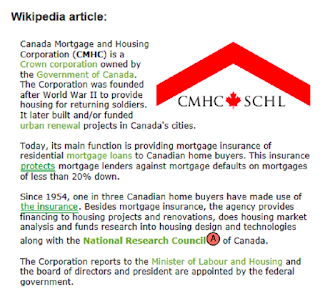 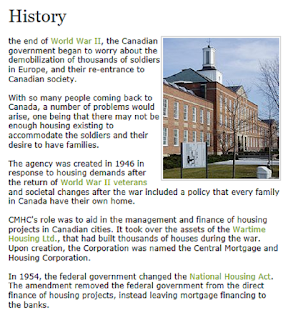 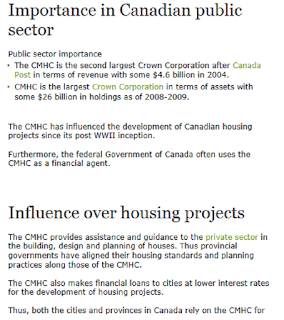 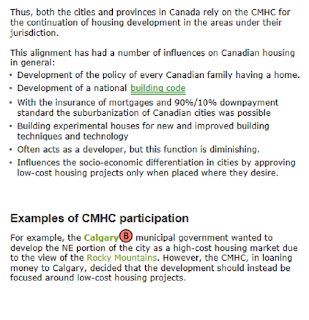 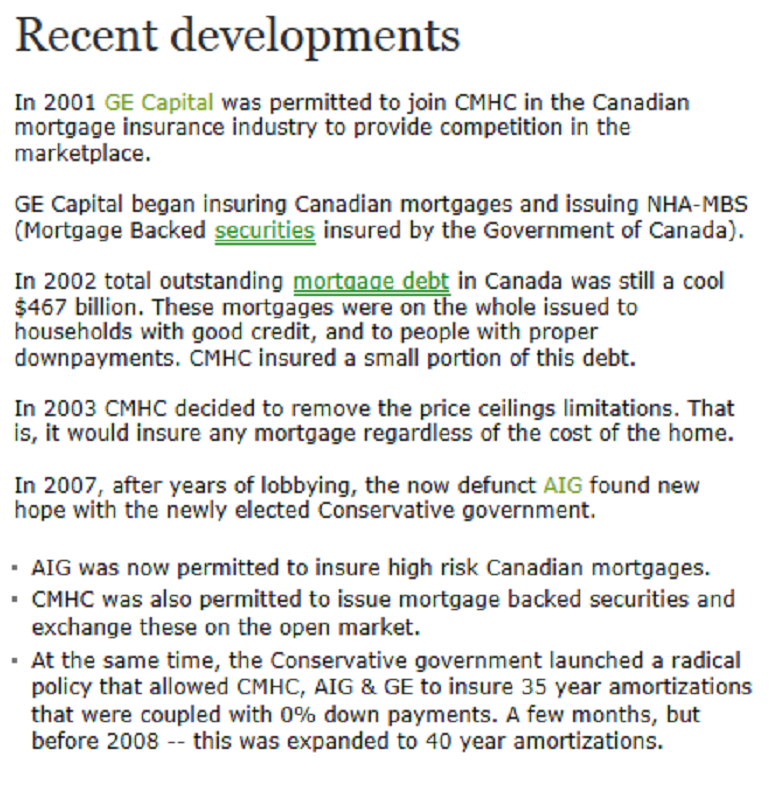 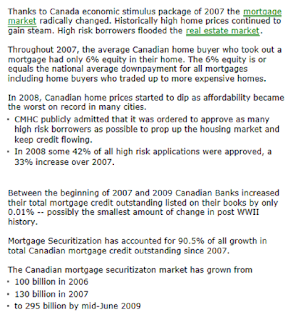 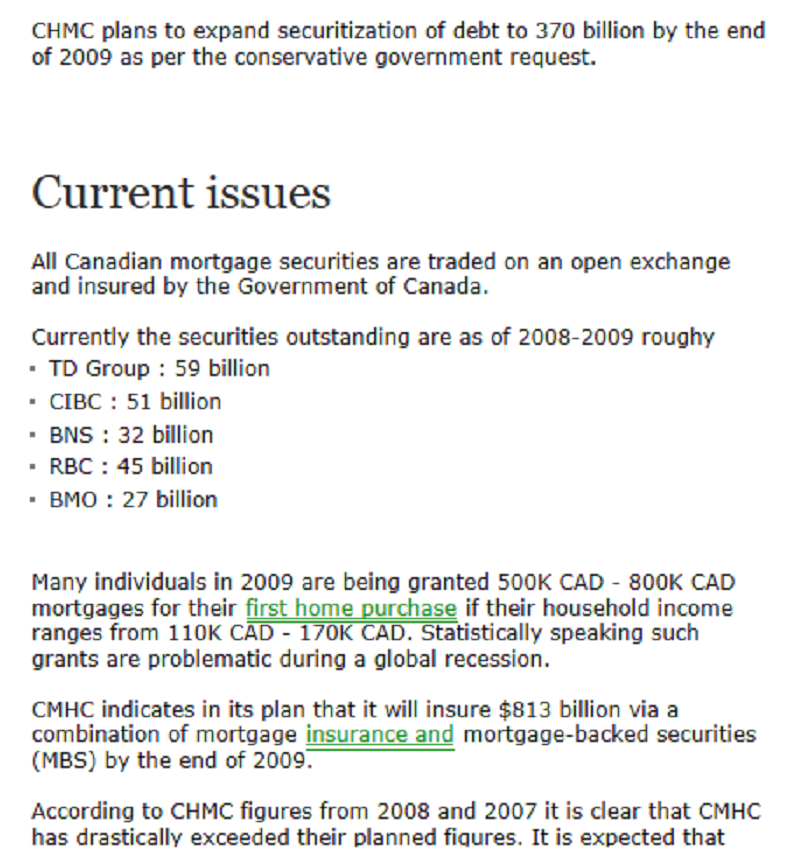 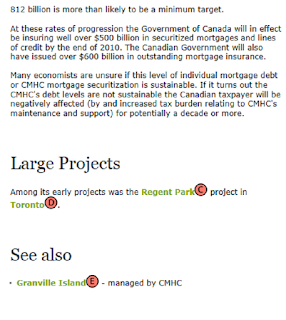 
Please read disclaimer at bottom of blog.
Posted by Whisperer at 9:17 PM