The gutting of the Foreign Buyer's Tax - might it be Krusty's Achilles Heel? 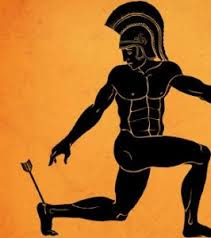 In our last post we outlined how the our intrepid Premier, Krusty Clark, and the BC Liberals appear to had bowed to pressure from the Real Estate Development community and gutted the 15% Foreign Buyers tax implemented last summer.


Muckraker extraordinaire Bob Mackin advises sources tell him bigwig Developers threatened to withhold huge political donations to the BC Liberals unless they guttered that tax. 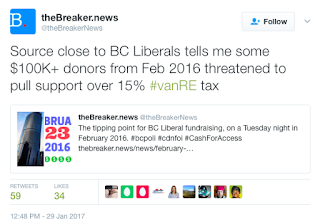 Krusty and Co. caved and not only undid the immensely popular move that addressed an out of control real estate market, but they also threw short term fuel on the housing bonfire by introducing a first time home buyers plan that gives young kids the necessary downpayment to get into the housing market. The introduction of this latest moral hazard into the housing mix is just the panacea the condo developers needed to boost a sagging real estate market in clear correction mode.

Combined with the gutting of the 15% Foreign Buyers tax, it will be interesting to see the results at the end of the month.

Just how significantly are the FB tax changes

Another growing name in muckraking media hall of fame is Ian Young, who writes for the South China Morning Post.  In a regular column titled "the Hongcouver" (a title which would have gotten any caucasian crucified by the PC crowd), Young outlines Vancouver’s foreign buyer tax and the work-permit loophole ‘you could drive Highway 99 through’

Young outlines how the rationale for the BC Liberal governments plan to offer exemptions to the tax is sound "assuming that the goal of the tax is to improve affordability by preventing foreign capital further skewing a market that had become detached from local incomes (and is not, say, a pre-election political tactic)."

The theory is that people who live and earn locally should not be unfairly punished.

But when you look at the changes, even the simple minded can see the real intentions of the changes.  As Young writes, "offering foreign-buyer-tax exemptions to work permit holders was a 'Swiss cheese' proposal. “The term ‘work permit’ is too vague to implement the intention (as) foreign-funded buyers pursue permits primarily to escape the tax. There’s a risk that new grads, backed by foreign funds and/or acting as proxies, will dive in."

With less than 100 days to the Provincial election, the BC Liberals are in full campaign mode.  Desperate to preserve political donations, they pragmatically axed the popular move they made last summer by responding to overwhelming public demand to deal with the massive amount of cash (created by the unprecedented excess credit being created in China) sloshing around the world.

But in doing so, the BC Liberals may have created a weakness in their election machine which the politically adept should be exploiting like they were the rebel alliance attacking the Death Star.

The link between the changes and Real Estate Development slush fund money slaps you in the face.  Public anger has not abated from the damaging effects all this malinvestment is having on our communities.

The only saving grace for the BC Liberals may be the inept BCNDP and the mainstream media.

Rather than fully focus on the link, the spotlight has been on a pointless harangue about false allegations of BCNDP computer hacking by the BC Liberals.

And in the process the real scandal that should inflame the voting public is being shoved to the back pages.

It is exactly these types of scandals which ultimately brought down the BC Socreds and Bill Vander Zalm, Glen Clark's NDP, and lead to the resignation of Gordon Campbell.

But BCNDP political ineptitude appears to reign supreme. Horgan has failed to capitalize.

The Vancouver Sun is showing signs of following up, but Krusty is deftly promoting the entry level buyer angle and is successfully throwing up teflon on the silly computer hacking story.

We'd be willing to suggest that throwing the R/E Industry the 'first time homebuyers' bone would have been sufficient to address donation slippage. Gutting the Foreign Buyers Tax and the apparent linkage to massive R/E Developer political donations is their achilles heel.

Will the BCNDP exploit this explosive connection?

The gutting of the Foreign Buyers tax is THE fulcrum that could swing the 2017 election.

So far the Opposition has failed to capitalize on it.


Please read disclaimer at bottom of blog.
Posted by Whisperer at 10:57 PM