Wed Post #1: Is Horgan as incompetent as Adrian Dix? 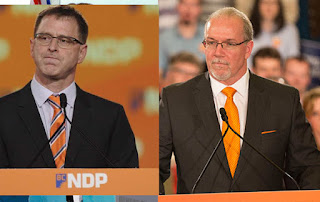 We see little today to alter that impression.

As you will recall our current Premier, Krusty, adeptly remade the BC Liberals after the resignation of Gordon Campbell and leveraged the built in weaknesses that Dix brought to the table as the BCNDP candidate in the last election (his inherent ties to the corrupt Glen Clark government) and swept to a victory almost no one saw coming on election night. A victory on par for shock value that Donald Trump recently executed over Hillary Clinton.

Four years later, Krusty had seemly failed to heed the lessons of the Gordon Campbell implosion and - until last summer - looked destined for a loss in the upcoming May Provincial elections.

In early 2016 the BC Liberals were being hammered by the BCNDP's David Eby.

Eby is a relative newcomer and a bit of a rising star. He first shot to prominence when he was elected the BCNDP MLA for Vancouver-Point Grey in the 2013 provincial election shocker. In an upset victory for the ages, victory was tempered for Krusty by the fact Eby actually defeated her in Clark's own affluent west side Vancouver riding by 1,063 votes.

Krusty was forced to get into the house through an Okanagan by-election months later.

Since then, as housing critic, Eby has masterfully leveraged the havoc that massive worldwide excess credit is wreaking on the Lower Mainland.

This is no small accomplishment considering it's the policies of the Bank of Canada, CMHC and federal government that are to blame, not the BC Provincial Government.

But inaction by Krusty to do what she could to mitigate the damage was creating a rising tide of public resentment. Eby acurrately painted the BC Liberals as being in bed with their Real Estate Development cronies and tied that connection into exacerbating the Vancouver situation.

It struck a chord with the public and Eby was making massive inroads into the BC Libs political support.

Some even wondered if Eby's performance was Leader worthy.

Krusty responded - big time. In a move that astonished even this humble scribe, the BC Liberals imposed a 15% Foreign Buyers tax. Krusty read the mood of the people and moved with lightening speed to enact a significant policy change.

It was roundly cheered by many - both as significant and potentially effective.

By mid September, 2016 the BC Liberals were able to ride the benefits of both a runaway housing market and their attempts to contain it. They announced that, "the B.C. government had raked in $2.2 billion in revenue from the property transfer tax and the new 15-per-cent tax on foreign buyers of Metro Vancouver homes."

That’s a billion dollars more than the government had projected.

As the National Post noted, "That enormous windfall caused Liberal MLAs to break out into a spontaneous conga line through the legislature. Finance Minister Mike de Jong was forecasting a surplus of $1.94 billion, up from an earlier projection of $264 million. He then announced that $500 million from the property tax would fund a housing affordability program and another $400 million would go into the B.C. prosperity fund “as a legacy for future generations,” he said. And this, for the cherry on top: The surplus allowed the government to scrap a planned four-per-cent increase in medical service plan premiums. It wasn’t as tasty a treat as an announcement to revamp or scrap the loathsome MSP entirely would have been. But it did make the medicine go down more easily."

Krusty had neutered the BCNDP criticisms and turned the tide heading into the May 2017 Provincial election.

But in the last three weeks there has been an astonishing about face in the BC Liberal position. Faced with a total collapse in real estate sales (luxury sales down 91% and Vancouver home sales plunged 40%) Krusty has been under enormous pressure to undo the steps she took last September.

Finally she cracked, backtracked and bowed to the pressures of the Real Estate Developers - to the major donors to BC Lib political coffers.

So where is David Eby as this happens? He has been all but invisible.

And now as Toronto housing market starts replicating the excesses seen in Vancouver, the Bank of Montreal publicly declares that Toronto's housing market in a bubble.

And what is a bubble as per BMO economist Douglas Porter?;

That's a definition that describes Vancouver to a tee.

So here you have Canada's major banks finally calling the situation for what it is. And in the midst of it all, Krusty and the BC Liberals are throwing gasoline on a raging fire by gutting the 15% Foreign Buyers tax and introducing the new 'first time homebuyers' giveaway. And it appears to be directly linked to threats by BC Real Estate Developers to yank political donations.

Why isn't David Eby front and center holding the BC Liberal's feet to the fire over this?

You have to wonder if there is a backstory within the BCNDP here.


Please read disclaimer at bottom of blog.
Posted by Whisperer at 12:19 PM